I’m not well-traveled around the greater northeast wilds of Philadelphia, but recently was in the area to visit a friend who moved to Feasterville earlier this year. We hadn’t seen each other in quite a while so a celebratory late luncheon seemed in order. In checking out the possibilities nearby, I noticed Toscana 52 was only a few minutes’ drive from her place, and she’d never been there before. Perfect! Alas, I wish I could say the same about our meal that followed.

Now, I was aware that Toscana 52 is part of the same family of restaurants as A’Pizze in Woolwich Township and Toscana in Mullica Hill, two restaurants where I’ve had mixed experiences in the past. Some things I’ve really liked at both, others I’ve not liked at all. But, my friend is vegetarian and likes Italian food, and I’m always willing to give a place a try. At Toscana 52, their “gimmick” if you will is to feature specials from a different region of Italy every week of the year (hence the “52” in the name. Whether it’s a play on Seasons 52 at all, I have no idea, but Toscana’s not going to be giving them any real competition, I don’t think.)

Pulling in off State Road, I had to almost laugh at how identical the exterior of Toscana 52 looked to Mullica Hill’s Toscana. The menu I’d browsed on-line looked fairly familiar as well in structure and offerings, although lacking in the wood-fired pizza and breads that both Toscana and A’Pizze serve. Still, I thought the interior was quite nice – a little darker earth-tones and more subdued than Toscana in Mullica Hill, but still going for that pseudo-Tuscan color scheme and feeling. Just a little more “classy” and less “tacky”. We were seated promptly and given menus, including their rather extensive wine and cocktail list. Well, that’s a nice change from the BYOBs of the Jersey Toscanas…and the selections are very good, with a wide variety of predominantly Italian wines available by the glass and bottle at acceptable prices. They even have some Super Tuscans on the menu for those looking to splurge.

The featured “region of the week” was Livorno, hence some very tempting-sounding fish dishes on the menu as specials including traditional bacala and a special Livornese fish soup. But, as I wanted to stick with dishes my vegetarian friend and I could taste together, there was only one special of the week that we could both enjoy: a spaghetti entree described as being served in a sauce of olive oil, garlic, tomatoes, fava beans, cauliflower, baby asparagus and “aromatic herbs”. Sounded great! She chose the Eggplant Rollatini from the regular menu, and we both got wedge salads (not included with entrees as at the other Toscanas, but for $2.99 at lunch time as an “add-on”) and the Mozzarella Flambe to share as a starter. I wish there had been more vegetarian-friendly appetizers or salads to choose from, appetizer-wise it was basically 1 of 2 mozzarella plates or bruschetta (at least they did remember to leave the bacon off her salad.) 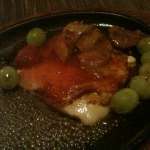 Our bread basket was promising from an “authenticity” standpoint: classic fresh Tuscan-style bread (ie, not very seasoned, soft but with a nice crust) and a package of imported thin breadsticks…although no restaurant I’ve ever actually been in, in Tuscany, serves such with strongly herbed and sweetened whipped butter. The Mozzarella Flambe came out with a lot of extravagant presentation (including, yes, setting it on fire) on a huge tray…and then was a rather small plate to share for $9.99. Still, the taste was quite intriguing and my companion enjoyed it a lot, though perhaps it was a bit on the sweet side for me with the kind of cloying strawberry reduction. I did like the grilled pear and fresh sweet grapes kissed by the flaming Sambuca. This is basically a dish I’d like to try to make – and make better – at home.

The wedge salads were basically just as they are prepared at the other Toscana restaurants, albeit a bit smaller in size (perhaps as they were just the luncheon “add-ons”). It’s not a fancy salad, but I do like it and occasionally crave this particular salad of theirs. I think there must be something addictive in their blue cheese dressing (don’t ever bother getting it with the balsamic, it just doesn’t work as well on the wedge.) I enjoyed a really nice Italian Chardonnay with these starters, and then ordered a Nero d’Avola to have with my pasta. Both wines were excellent and in the $7-8/glass range. 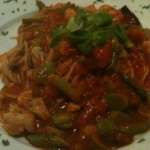 Alas, for me at least disappointment arrived swiftly with my pasta. It sadly was suffering from the same fate that so many of the pasta dishes at Mullica Hill’s Toscana suffers from: an extreme over-saucing. Really, look at the picture here. If you served pasta like this in a restaurant in Tuscany, you and all of your heirs and family would be banished from the town. Completely over-sauced, but worse than that, under-seasoned. I don’t know what aromatic herbs were supposedly added as I could not taste any of them, save a sprinkling of parsley on the plate and a spring of basil on the very top.

But even worse yet, the dish was unevenly warm in a way that could only have been the case if the pasta had been pre-made and microwaved before serving! Sections of my plate were appropriately and nicely hot, but other mouthfuls were decidedly and unappealingly lukewarm at best. The pasta was also well-overcooked and mushy. Really, this was just a sad disappointment of a dish all-around. I also had to pick out all of the excessive slices of not very well cooked garlic, but at least they were slices so I could separate them out (and avoid stomach trouble later.) 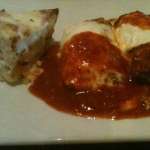 I do think my companion did better with her eggplant rollatini, although I did not taste it, only her side dish of baked pasta and cheese which was yummy. She did like the rollatini a lot, though could only finish one and took the other home for dinner. I took most of my plate home out of courtesy, although I’m not even sure if it’s worth trying to save the leftovers with some actual fresh spices at this point when the noodles are in such a sorry shape.

We skipped dessert and I only had some coffee to revitalize before the drive home. The total bill with 1 appetizer, 2 side salads, 2 entrees, 2 wines, 1 beer and coffee was $64 before tip. I suppose that’s not too bad, but I really did feel cheated by my pasta dish. If I wasn’t with a friend where the point was to have fun together, I honestly would have sent my dish back at the very least for the temperature issues. That’s just inexcusable in my book and a clear sign that food is not being prepared as fresh as a restaurant is claiming to. If I was up her way again I’d go back only really for the nice wine list by the glass and the decent salads, and perhaps avoid the pasta and try something that’s a lot harder to premake and ruin, maybe one of the paninis or something. But my experience wasn’t really good enough to make sure a return visit any kind of high priority.