I posted my first thoughts on El Rey Mexican Restaurant back in November 2010, not too long after it first opened. This funky little Stephen Starr restaurant – located in a former diner that had been good for little but sobering up after a late night of drinking – remains one of my favorite lunch spots in the city today. I seem to always end up here once every couple weeks when in town, craving their creative and tasty food. And killer margaritas. 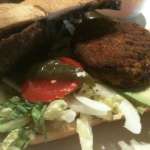 The bar in the front, which was formerly the diner counter, is a great place for solo dining. And you still can’t beat the $10 “fast lunch” special of 2 courses plus chips & salsa verde. I’ve basically eaten my way through every option on that menu at this point, particularly loving the wild mushroom soup and the tostada with chicken tinga and cotija cheese. I also appreciate that for the past few months, there is a daily changing selection of options on the lunch special menu – three appetizers and three entrees – so one never gets bored. These changing options typically feature fresh, seasonal ingredients so for the summer months, there have been nice chilled soups and salads like grilled pineapple with pomegranate and baby greens – delicious! For the summer my favorite drink in Philly is back as well – the Pineapple Frozen Margarita. There is seriously nothing more cooling and refreshing on a hot summer day.

My only quibbles are that some days the service at lunch is not as “fast” as it should be for a “fast lunch” special. Other days it’s almost TOO fast, with my second course coming out before I’ve even put a dent in my salad or soup. I also find the portion sizes can be difficult to judge – a recent Chili-Crusted Eggplant Torta was massive and really filling. Another time, a Flounder Veracruz almost seemed like a joke, barely a few ounces of fish on a plate and a single small scoop of rice. I’m not expecting massive quantities of food for the price, it’s just that some days I definitely end up eating my way through the tortilla chips more than others to fill up.

Still, I’ve had more than enough “hits” here versus “misses” that I keep coming back. Give it a try if you haven’t already – just do not miss that frozen margarita!