Last week I posted my first impressions of A’Pizze Tuscan Grill in Swedesboro, New Jersey. Overall I was quite positive about the experience, from the food we sampled to the quick and efficient service. So when my partner’s dad requested going there for Father’s Day dinner as he’d liked it so much on the first visit, we figured why not?

Of course, I know that going out to eat on any sort of major holiday like Father’s Day, Mother’s Day, Valentine’s Day etc. can generally be a bad idea. And I’d like to give A’Pizze the benefit of the doubt that the holiday was why we suffered from some pretty poor service and some less satisfying food on this second visit. We showed up at the restaurant just a little after 6pm, perhaps 6:10 by the time we got inside – without a reservation although we were seated quite promptly. The restaurant was about half-full when we arrived, several larger parties but none bigger than 6-8 people, and some smaller groups of 2-4 like us as well.

We were not seated in an out of the way place and several servers were working the large tables around us. And completely ignoring us. Until I checked my watch and saw that it was now 6:30, and no one had stopped by our table once to greet us, offer to open our wine, bring us any water or anything. I was literally one minute away from going up to the hostess stand to see if anyone was going to wait on us when one server (who we’d had on the previous visit) noticed my death glare and came over apologetically in another minute. Apparently none of the servers knew who was supposed to take our table, so she was claiming it now. Honestly that doesn’t sound like they have a very efficient system in place if that was the case, but whatever.

It took us at least another ten minutes to get first our wine bottles opened, glasses to the table, water glasses and what substitute she could find for an ice bucket in the kitchen. Hmm. Well, at least by this point several of the larger groups seemed to be leaving/finishing up, so I hoped service would improve once we placed our orders. My companions ordered the Veal Parmigiana ($15.99) and the Fettucine & Crab Asti ($17.99), both of which come with wedge salads. I wanted to try that other pizza I’d been tempted by last time, the Clams Cilantro ($14.99 individual size) and the Apple & Walnut Salad ($8.99) to start. 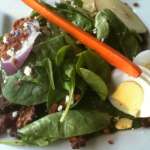 The Wedge salads came out quickly, but then the service issues continued again. My companions were halfway finished with their salads before my Apple & Walnut Salad arrived. It’s clear (from how quickly I saw wedges being delivered to other tables by our same server while I waited) that they must keep a lot of those wedges prepped and ready to go – but even if it’s going to take a few minutes more, isn’t it better to wait to bring out appetizers all together to a table? Instead of leaving one person waiting and wondering? The server did apologetically state that “the kitchen was backed up” when my salad finally arrived. Featuring baby spinach, tomatoes, apple, bacon, egg, blue cheese and candied walnuts, it was tasty and very fresh, and again I liked that it wasn’t over dressed at all. The only thing I wasn’t crazy about was the coating on the candied walnuts – something was a bit off in the spices on them that didn’t really mesh with the other flavors in the salad.

I was still picking away at my salad when my companions’ dinner plates arrived. Which was fine, as again my entree – the pizza – was a bit delayed in coming to the table. What was a shame was that it was also somewhat overcooked – a nice char on the crust is one thing, but this one was looking outright blackened. Fortunately the pie had not been overcooked to the point of no return, but for some reason I didn’t find the flavors as strong as I’d been hoping for. The cilantro was barely detectable as were the promised chili peppers (I had to snag a jar of red pepper flakes off another table to add some “spice”.) I also got an unpleasant bit of clam grit on my first bite into the pie.

I did like the taste of the Fettucine & Crab Asti that I sampled, although it was too much of a heavy cream pasta dish for me to want to order for myself in the future. Our guest of the evening, my partner’s father, was very happy with his Veal Parmigiana, so I suppose at the end of the meal that’s all that mattered. We did share one almond tiramisu before leaving, and I liked that better than the regular tiramisu for a slightly different flavor.

Overall I’m just not sure what to say. This second visit to A’Pizze just did not impress me as much as the first, and sometimes for me bad service can sour a meal out even more so than bad food. I want to believe it was just Father’s Day craziness – I also noticed that Chef Mimmo did not appear to be on the premises last night, perhaps off celebrating a deserved Father’s Day himself? In either case, A’Pizze needs to get their kitchen and service staff a bit better trained to handle big crowds in the future. If this had been my first meal at the restaurant, I’m not sure I’d be quick to want to give them a second chance. Now I’ll have to give it one more go in order to have a 2 out of 3 opinion, yay or nay.