Have pig, will eat.

So it’s been a while since I updated – such has been summer in South Jersey. I still have Italy food notes to complete and some recipes from my summer garden bounty of tomatoes, bok choy, peppers and eggplant. But today I’ve got something else on my mind: pork. And lots of it. Like, hundreds of pounds of it. 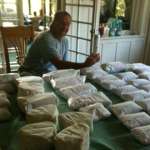 This is my mother’s farmhand posing with the bounty – well, part of it – from one of her recently butchered pigs. This pig was about 2 years old and about 500 pounds when brought in, after a happy life living about as natural as a pig can live, enjoying the outdoors in good weather and a sheltered barn in the winter months. Lots of people kept saying a 500 pound pig would be nothing but pure fat. Well, yes, we got about 100 pounds of fat back to split between us (I’m planning on rendering lard and saving some smaller slices to try using in various recipes). But we also got about 50 pounds of smoked ham, and look at how glorious this ham is: 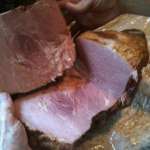 Yes, there’s some marbling and fatty bits in there, but the taste…oh, the taste. There’s just no comparison to the overly-lean, factory-farmed pork you get in the supermarket. I’m afraid I may be spoiled for life after having a taste of some of the best ham I can remember tasting in years.

In any event, I have a monstrous shoulder roast, pounds of chop and ground meat, ribs, chops, smoked bacon and also as a special request to the butcher, I got the tongue, jowls and cheek meat because I really want to experiment with slow-cooking some of these more “exotic” cuts. It’s going to be an interesting fall and winter cooking our way through all of this pork, and perhaps learning from this experience what to request if/when we have another pig ready to make the ultimate sacrifice.

I am an unrepentant carnivore, yet I believe in paying respect to the animals who give their lives to feed us and making as much use as possible out of their sacrifice. I know this animal lived a good life, and we thanked it profusely today while taking our first tastes.

This entry was posted in Cooking and tagged butchery, cooking, farming, pork. Bookmark the permalink.

One Response to Have pig, will eat.