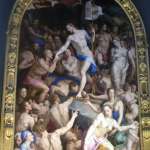 "The Descent of Christ to Limbo" by Bronzino 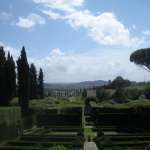 Thursday in Florence was a busy day. We began with a return visit to one of my favorite places in the city, San Marco, to see the beautiful fresco paintings by Fra Angelico. To our delight, we also happened to be there in time to see a wonderful exhibit of artworks finally restored after the Florence flood of 1966. Among these works was a stunning painting by Bronzino of “The Descent of Christ to Limbo” worth the visit alone. That afternoon and early evening, we had been invited to Villa I Tatti‘s 50th anniversary celebration, so we spent many delightful hours in the company of some of the world’s greatest Italian Renaissance scholars in beautiful villa on the edge of Fiesole.

After a lengthy cocktail party at I Tatti with plentiful food and snacks, we were not hungry (or at least I wasn’t) for a large, full dinner that evening. So, to keep things simple we decided to try Trattoria Accadi, a cozy-looking establishment we’d noticed very close to our hotel on Via Borgo Pinti. I see that this restaurant gets a fair amount of praise on-line for having affordable, good quality Tuscan cuisine. I found the food acceptable, but not all that noteworthy, at least not compared with our previous two evenings’ meals and in retrospect compared with where we would dine during the rest of our vacation.

Trattoria Accadi is quite small and simply decorated – and yes, tables are covered with your cliched red-and-white checkered cloths. The menu is short and no wine list was offered (at least not to us, perhaps one has to ask?), only vino della cassa, red or white. I noticed we were mostly dining with other tourists even though it was late in the evening, perhaps as several hotels are nearby (we actually found ourselves seated next to two American professors who had also been at I Tatti that day.) A sign outside of the restaurant promised “We have porcini!” and the tagliatelle ai funghi porcini sounded like a perfect choice to me – but alas, they were now out of the dish. So instead I quickly decided on spaghetti con cozze, even though I’d had the same two nights before (I mentioned I can live on shellfish in Italy, yes?) with the bresaola con rucola e parmigiano (dried beef with arugula and cheese) to start. My companion suddenly found his appetite again and decided to start with zuppa di cozze (mussel soup), followed by ziti con burro e salvia (pasta in a butter and sage sauce) and grilled branzino. 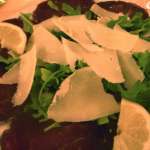 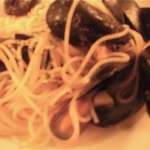 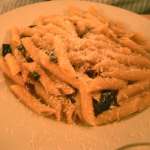 My bresaola was a very generous plate, although the meat was quite chewy and tough (which is not necessarily the case with all bresaola; a taste I had the next day at lunch time was much kinder to the tooth.) My teeth actually hurt after eating it. A taste of the zuppa di cozze was good, but I did not indulge much as I knew I had more mussels to follow. My pasta was acceptable, but not as delicately flavored (and rather stingy on the shellfish) as compared to two nights before at Ristorante Natalino. My companion’s pasta in sage and butter sauce again was decent, but I found myself satisfied with just a taste, not especially craving more. 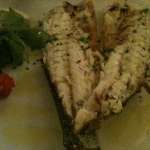 Pasta dishes were cleared and we waited for my companion’s branzino. And waited. And then we waited some more. He is not one to complain nor cause a fuss in restaurants and was ready to assume they’d simply forgotten his order. Yet the waiter eventually dashed over to apologize and implore that his fish was on its way shortly. When it arrived, the branzino turned out to be well worth the wait and in fact the highlight of our meal. Although I was not especially hungry at this point, I could not resist stealing more than a few tastes of this perfectly grilled fish, especially the crunchy and flavorful charred skin. In fact I regretted not ordering the branzino for myself and skipping my earlier pasta dish entirely…

Our total for the night with a half-liter house wine, bottled water and espresso (mine with grappa) was 56 Euros. Certainly cheaper than our other meals so far (with perhaps only skipping dessert and one antipasti), which may be why Trattoria Accadi earns so much praise for being reasonably priced for Florence. Yet I can’t say I was especially thrilled with the food, save for the wonderful grilled fish. Perhaps Trattoria Accadi is one of those places you really need to know what to order to fully enjoy it. But with so many other choices for dining in Florence, I can’t say it’s a restaurant I’d be in a rush to return to in the future.