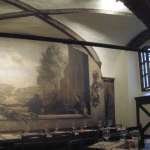 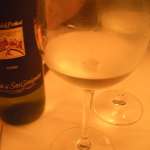 Our first full day in Florence, Italy was spent running from one museum and historical site to the next between torrential downpours and brutal thunderstorms. We began the day at the Uffizi and ended at the Accademia, staying until nearly closing time at both to appreciate the artwork – and to try to stay dry! Having only eaten lightly all day, by evening we were ready for a full, hearty meal. Ristorante Natalino fulfilled our needs spectacularly.

I admit I was a bit skeptical at first, not knowing the history of the restaurant (Natalino has been at that location in Florence since 1880). Located in a busy district of restaurants and bars near our hotel, we were browsing menus when the hostess at Ristorante Natalino came quickly to the door to try to beckon us inside. An overly eager host usually is not a great sign in Italy – often one is ushered inside past an attractive front room with promises of wonderful homemade meals, only to be seated in a stark back dining room and served mediocre, premade pastas and pizzas. Yet the menu at Natalino promised some unusual and tempting offerings compared to the nearby competition, so eventually we wandered back and decided to give them a try.

Inside Ristorante Natalino, one immediately gets the strong sense and feeling of tradition and history. The dark wooden tables, white walls and archways all feel very typically Florentine, and a back wall is decorated with a beautiful fresco. I studied their wine selection, pleased to see a nice variety of everything from quality, inexpensive Italian white wines to super-expensive “Supertuscans”. I decided upon one of my Tuscan favorites I cannot always find at home, a Teruzzi & Puthod Vernaccia di San Gimignano (20 Euro). I suspected we would be ordering a fair number of seafood dishes that night, so the bright and acidic flavor of vernaccia seemed to be a good match. 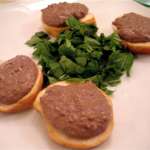 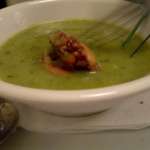 The menu at Ristorante Natalino promises and delivers a selection of “tipico fiorentino” offerings. We decided to begin with Crostini Toscani (5 Euro) and an evening special of Creamed Zucchini Soup with Octopus (12 Euro), which sounded just too fascinating not to try. Both antipasti met expectations. I have become quite the fan of chopped chicken livers at home in the past few months, so I was eager to try the Tuscan-style preparation popular as a crostini topping. What surprised me at first was that the chicken liver topping was warm, not served cold as a salad as I’m used to. Once I got past that initial surprise (and the smoother, more pureed texture), I enjoyed the flavor very much and found it more subtly seasoned than American deli-style chicken livers. The zucchini soup had a lovely, velvety texture and the octopus was tender and a nice compliment to the soup. Both dishes were very soothing and warming after the cold, damp weather of the day. 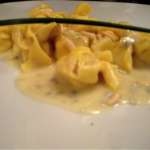 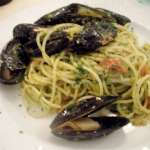 For our primi piatti, we both chose pasta dishes: Fiocchini di pere al gorgonzola (pasta “pockets” filled with pear and gorgonzola cheese, 9 Euro), and another special of muscles in white wine and tomatoes over spaghetti (12 Euro). The Fiocchini were spectacular: creamy, sweet, salty and tart – just one of those dishes I would kill to be able to enjoy somewhere at home (or learn to make for myself). The spaghetti was delightfully al dente and rich with the flavor of the shellfish, not drowned in oil and garlic as so many preparations of mussels or clams over pasta can be. I could nearly live on shellfish in Italy. 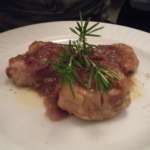 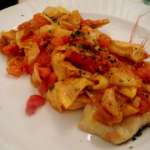 Branzino filet with potatoes and prawns

For my secondi, I had to try the fascinating sounding Branzino topped with prawns and potatoes (20 Euro). This was a very filling, tasty entree of seabass covered with chopped tomatoes, thin-sliced potatoes, tender shrimp and very light, subtle seasoning. My companion tried the pork chop fillet with Marsala wine reduction and onions (13 Euro) and declared it equally a winner. For dessert, we stuck with a light and simple panna cotta (7 Euro) to share and two espresso.

The entire meal was extremely satisfying with absolutely nothing about which to complain. The food was a delightful mixture of traditional Florentine recipes and innovative, more modern fare, each prepared with care and an eye for detail and attractive plating. Nothing was strongly flavored or spiced, but every ingredient as fresh as possible and the preparations allowed the quality to shine through.

Our total bill for the evening was 111 Euros (including 2 Euros each for “Coperto” and bottled water.) This would end up being one of our most expensive meals while in Italy this past trip, but very much worth the price. Ristorante Natalino definitely makes my list of “to return” restaurants in Florence and one to which I’d give the highest recommendation for any “foodie” traveler to the city.

One Response to Review: Ristorante Natalino in Florence, Italy