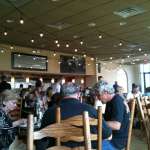 I have to confess, there’s one thing that really turns me off a restaurant meal and that’s poor service. It doesn’t even have to be blatantly bad, such as forgetting ordered items or not taking care of problems with food as it comes out of the kitchen properly. It can just be an accumulation of little problems and small things, or an overall impression that I am a bother to my server for even being there, instead of a guest deserving of his or her attention. That was part of the problem I had with Barone Tuscan Grill, a relatively new (as of 2010) Italian restaurant in Woolwich, New Jersey, part of the Barone Restaurants group with locations in Moorestown, Collingswood and Maple Shade. (Odd that after about a year they still haven’t updated their main website to include information on this location, although they do have a Facebook page.) While overall the food was acceptable – if fairly pedestrian – Italian-American fare, I felt ill-welcomed most of the evening by our server and her seeming disinterest in our party. 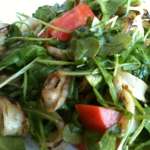 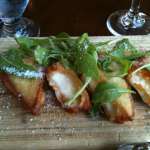 It was early on a Saturday evening – just after 6:30pm – when we arrived, and while the restaurant had some occupied tables, it was nowhere near full or overly busy. We were seated fairly quickly near a window in this large, bright and airy restaurant. The decor is fairly simple and stark, with creamy walls decorated with large black and white photography prints of Italy. String lights – rather like Christmas lights – hang from the ceiling panels for “ambiance.” Our server got off to a good start with us, bringing us menus, water, and taking our bottle of wine (Barone is BYOB) to be opened. She rattled off three or four specials of the night very quickly and somewhat mumbly – one of our party at our small table confessed he had not been able to understand anything she had just said.

She came back to take our order fairly quickly after that and everything seemed to be going fine. Yet I noticed after a number of minutes passed, and other tables large and small were seated around us, that they had all received what looked like very nice baskets of fresh baked bread. Even other tables being taken care of by our same server had received them. We hadn’t. This started to annoy me. I know, a little thing but I was hungry and we were seated in an area where not many servers passed at all, so it was difficult to try to get her attention to ask her (or another server) if we could get some bread, please. I finally managed to catch her eye as she was taking another nearby table’s order. She didn’t come over right away, but disappeared to the kitchen service counter for a while and eventually returned with our appetizers – this was just about a half-hour after we’d first been seated, with nothing but our wine and water.

I mentioned at this point that we never received any bread (I also badly needed a water refill.) She gave me a shocked look and an “oh, really?” and vanished quickly. I hoped that meant we would finally get some bread, as I really wanted it to go with the Grilled Calamari with tomatoes and arugula we’d ordered ($9), and the pan-fried mozzarella (Pan A’Carrozza, $8). My two dining companions were almost done with their share of the appetizers before a basket of bread finally arrived with a quick mumbled “sorry” and she dashed off again. The bread was indeed tasty – nice triangles of pizza dough, good to go with the appetizers as I had thought – yet the “seasoned” dipping oil it came with tasted of nothing but too much salt.

Green salads came next before our entrees (which I did not know we would receive as it’s not mentioned anywhere on the menu that I saw.) They were fine, if simple, decent lettuce with tomatoes in a light vinaigrette. It was 40 minutes between when our appetizers arrived and when we received our entrees – now over an hour since we’d first come in the restaurant, based on the time stamps on my photographs. 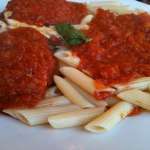 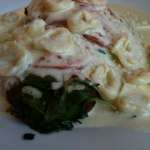 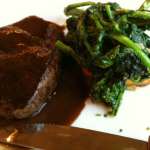 I ordered one of the specials of the night, a Filet Mignon in a Marsala wine sauce, with Broccoli Rabe and Grilled Polenta. The filet was cooked properly and a nice cut of steak, and fortunately for me the broccoli rabe was not over garlicy as often can be the case (I have a garlic intolerance often triggered by heavy use of undercooked garlic at Italian-American restaurants.) Yet either I was already in an off mood because of our server and slow service time, or there wasn’t anything especially memorable or flavorful about the preparation. I’d say the same thing about our order of Chicken Parmigiana ($17), which was fine, but no better to my taste than you can get it at several good Greek-Italian diners in the Gloucester County area. The best tasting entree of the night was easily the Chicken Vesuvio ($19), featuring breaded chicken over spinach with mozzarella and tomato, finished with tortellini in Alfredo sauce. Tasty but definitely not a dish I would order for myself or want more than a few bites of, being quite the calorie and fat bomb with all that cheese and cream.

None of us could finish our meals, so we asked our waitress to have the leftovers boxed up to go. I had seen other tables brought a nice-looking tray of desserts to admire and decide from, but we were not even offered dessert by our waitress. We did ask for coffee and I guess she took that to mean to not even ask if we wanted to consider dessert? In any event, it took quite some time for our coffees to arrive – as in it was 8:30pm before our two regular coffees appeared on the table and several more minutes for the one decaf. We were not offered any apology or explanation for the delay – I could see there seemed to be some confusion by the drink station, as if no one had started brewing fresh coffee when current pots had run low, but still. It’s one of those little aggravations and oversights that can end up marring a meal.

Our total bill for three entrees and two appetizers was just under $100 – fairly pricey, I thought, for Italian food in the area and given the quite average presentation and flavor. Given this and the slow service and other issues, I don’t think I’ll be in any rush to return to Barone Tuscan Grill in Woolwich, nor to try their other locations throughout the area. There are too many other options available in this part of South Jersey for Italian-American food, where I’ve encountered better service, price and at least comparable if not better food. I hate to come across so negative just based on one experience at a restaurant and it may seem like I had no “major issues” to complain about. But as I began this review, I am a stickler for good service when I’m spending good money to dine in a restaurant. If the service is a little shakey but the food is outstanding, I’ll give a place more chances and hope it was just a bad night. But if the food is only ordinary, and the service left me in a bad mood, I’ll be extremely hesitant about spending my money there again.

Edit after second visit: On family’s preference, I recently returned to Barone’s and had a generally better experience, although service problems persisted similar to our first time there. Once again, we did not receive bread and dipping oil/spices until we prompted our waitress when appetizers had already arrived, and an asked for ice bucket for our white wine was also forgotten after request. Our server seemed as frustrated by this as we were, in fact blaming the “bussers” at Barone’s for generally being very forgetful and negligent in such matters.

That said, our starters were tried that evening were all quite good: a grilled octopus special was wonderfully tender, flatbread tasty with good quality tomatoes, and a house-special asparagus covered in gooey cheese which it didn’t really need as the asparagus were so flavorful on their own. My entree of grilled chicken came with a nice vegetable “salsa” of tomatoes, olives and capers, although the chicken was a bit dry and overcooked. In general I think Barone’s does better with their starters and breads than their entrees and pastas. So I’m not quite as negative about Barone’s as I was at first, but they still need to sort out these service problems to really be a place I’m going to want to visit more frequently.