The Tale of the Twice-Fried Chicken at Resurrection Ale House

Is This Gastropub’s Fried Chicken the Best in Philadelphia?

Is this gastropub’s fried chicken not just the best in Philadelphia, but some of the best in the United States? Learn more about the dish that sends Philly foodies flocking whenever it’s on the menu.

Philadelphia may be known as the home of the cheese steak, but the city has many other culinary specialties of note and on the rise – including fried chicken. In their June 2010 issue, Bon Appetit magazine named the fried chicken at Philly’s Resurrection Ale House one of the 10 best in the United States, but many local residents already knew how wonderful Chef Joey Chmiko’s preparation of the dish truly was. Yet the dish grew so popular that the gastropub had to institute bizarre ordering policies and eventually removed fried chicken entirely from their regular menu. Now it returns only as an occasional special, which draws foodies from all around the city to enjoy when and while they can. Is Resurrection’s fried chicken truly worth all the hype, however? This author was fortunate enough to luck into one of the pub’s special fried chicken days and find out for herself.

Fried chicken is an ultimate comfort food favorite for many. Although it will never top anyone’s list of healthy food options, there are few treats better than well-prepared fried chicken: the crunch of crispy, well seasoned skin and batter, combined with the juicy flavor of tender, moist chicken meat. Served with mashed potatoes and perhaps a slightly sweet gravy or glaze, the meal is one worth the occasional caloric and fat indulgence for many of us.

Resurrection Ale House first opened in late 2009, taking over the old location of the Yello’bar on Grays Ferry Avenue in Southwest Center City. Run by Leigh Maida and Brendan Hartranft, who already owned the popular Memphis Taproom and Local 44 bars, Resurrection Ale House would soon receive praise for head chef Joey Chmiko’s creative pub menu. With an emphasis on seasonal preparations and quality ingredients, the food collected great reviews from local residents and food bloggers. Yet the highest praise was reserved for Chmiko’s twice-fried chicken, served with a sweet honey glaze and German potato salad. Many claimed it to be the finest fried chicken in all of Philadelphia, as Bon Appetit‘s Andrew Knowlton would confirm as well their June 2010 issue.

Demand for his prize fried chicken soon became an actual problem for Chef Chmiko. Philly Foodies scoffed when, in July 2010, Resurrection Ale House added the following disclaimer to their menu:

“The Cockamamie Rule About the Chicken: Yes, it is true, our Twice Fried Chicken might be some of the most written about chicken in the history of all chickendom, however, we are only able to prepare so many orders per day. In an effort to spread the chicken love around, we limit each table to 3 orders of fried chicken. Thank you for understanding. You will be rewarded in chicken heaven.”

Yet the situation grew only more dire as in the winter of 2010, the twice-fried chicken was removed entirely from Resurrection Ale House’s menu. Many wondered how or why such a decision could be made to remove the gastropub’s most popular, beloved dish. Many criticized Resurrection and Chmiko for developing an “attitude” about the dish, wondering if he was offended patrons were not trying his more upscale offerings in lieu of “simple” fried chicken. Yet the promise remained that the fried chicken could return upon occasion as a daily special, keeping hope alive for poultry lovers everywhere.

The Resurrection of the Twice-Fried Chicken

Fried chicken lovers’ dreams were fulfilled in March of 2011, when foodie blog Foobooz announced that on March 29, 2011, Chmiko would once again serve his legendary fried chicken – and nothing but fried chicken – for the day until orders ran out. Indeed, at just past noon on March 29, the Tweet went out: “Only 68 orders of chicken at Resurrection Ale House. 20 are accounted for already.” Being fortunate enough to be in the vicinity at the time and wondering what I would have for lunch, there could be no question about it: I had to at last try the famous twice-fried chicken for myself.

Typically Resurrection Ale House is a sedate location for lunch. I’ve never been there with more than a few other patrons, enjoying some good company with the bartender and great food like their delicious lamb burger with arugula. Yet on this day the gastropub was packed by 1pm. I grabbed one of the few open seats at the bar and was greeted warmly by the bartender.

“Chicken?” she asked with a smile. There was, of course, no other option but we were all there for one single purpose anyway. I nodded and also ordered a Pinot Noir. Beer may be the beverage of typical choice with fried chicken and despite Resurrection Ale House’s lengthy local and microbrew options, I’ve never been much of a beer drinker. They offer a small selection of interesting and quality wines by the glass as well as a full bar of spirits for those non-beer lovers like myself. 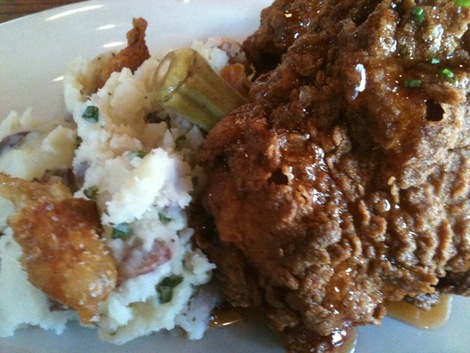 My plate of chicken arrived just as I was finishing my first glass of wine. Two generous, beautiful pieces of dark brown fried chicken rested atop a mound of German potato salad. For those who need a touch of greenery with their meal, a single friend okra was also included. One slice into my piece of thigh meat and my eyes could tell me before I’d even taken a bite: this was going to be one heavenly piece of chicken.

Indeed, the interior was cooked through perfectly – no sign of pinkness or blood on the bone. Yet glistening juice met my fork and knife, proving the meat was not dry or overcooked, either. The skin and breading crackled and crunched as I took a bite, savoring the wonderful flavors and texture contrast on my tongue. The honey glaze was not too heavily applied, just enough to add a touch of sweetness and revealing a subtle kick of heat – perhaps cayenne pepper and paprika was the secret ingredient here. The potato salad, too, was excellent, like a chunky, light mashed potatoes perfect for sopping up the last of the honey glaze – and bits of crunchy chicken skin. The Pinot Noir, too, ended up being a nice match with the chicken, picking up the peppery notes in the honey glaze. I went with a second glass to savor with my poultry.

As I was cleaning the last morsels from my plate, the crowd was beginning to thin, with about 30 orders of chicken left for the day. No doubt the evening dinner crowd would finish them off in no time. Chef Chmiko appeared from the kitchen briefly, looking tired yet accomplished – for good reason on both counts! My bill was $28 before tax and tip for my chicken and two glasses of wine. Not the most inexpensive lunch to be had around town, but well worth the price for that day.

Was Resurrection Ale House’s Twice-Fried Chicken the best fried chicken I’d ever had? I have to say, without hesitation, yes it was. I would absolutely make a date to be in Philadelphia the next time it was on the specials menu, that is for certain. In fact, given its popularity I don’t understand why Chef Chmiko doesn’t at least make it a one-day-a-week special, as many other restaurants in the area are starting to offer such as a Sunday Night Supper or mid-week special. It might not be a good idea for the city’s waistline, but Resurrection Ale House would surely benefit from the regular crowd of happy, chicken-loving diners they’d be sure to attract.

This article was originally published at the Yahoo! Contributors Network on April 6, 2011. Sadly, as of the summer of 2014 Resurrection is scheduled to close soon as the building is under contract for sale. Hopefully this great fried chicken will resurface elsewhere…?