When it comes to New Jersey Italian restaurants, there is no shortage of “red gravy,” Neapolitan-style establishments. Especially in South Jersey it sometimes feels as though we are just an extension of South Philly’s Italian stronghold, and Gloucester County in fact has one of the highest Italian populations in the state. Guillermo’s Fine Italian Cuisine has two locations: one in Egg Harbor, and one I just recently visited in Pitman. I wasn’t quite sure what to expect as my experience with Italian restaurants in New Jersey is quite variable, but overall I found Guillermo’s a cut above average for the area. Solid food, huge portions, reasonably priced and in an attractive location, Guillermo’s certainly is worth consideration and ranks well with the thick competition in the area.

I was first impressed with the atmosphere in Guillermo’s as it was not at all what I was expecting. The main dining room is spacious with light-colored walls and table linens, and large windows looking out over Broadway. Pitman has done much to retain its old “Main Street” feel, and even though it was a Friday night we were able to be seated right away without a reservation. The neighboring theater was mid-show, so we were dining late enough to miss the early evening crunch for tables.

One oddity that struck me right away was how Guillermo’s dealt with their BYOB wine service. I was asked before seating, right at the front hostess counter, if I needed help with my bottle of Chianti and basically shown to hand it over to the hostess before we were seated. This seemed strange. I’m used to bringing my bottle to the table and having it opened there for me – that way I can also make sure that the bottle is opened properly and the server doesn’t mash up the cork or get bits of it in my bottle. Nevertheless, our bottle was returned – and opened properly that I could see – not too long after our being seated and presented with menus.

The dinner menu at Guillermo’s is pretty much what you would expect at a South Jersey, traditional Italian restaurant. All the typical favorites are there among the appetizer and entree selections. Starters include fried calamari, clams casino, bruschetta and broccoli rabe, mostly all under $10 a plate. Pasta entrees include linguine, cappellini, penne, fettuccine, cheese raviolli, tortellini or gnocchi served in a choice of sauces, along with a few house specialties such as the Gnocchi Vincenzo (Potato gnocchi served in a spaghetti sauce with Romano and mozzarella cheeses). These are all under $15 unless featuring additional crab meat.

Other entrees feature chicken, veal and seafood in mostly traditional Italian-American preparations: think Parmigiana, Saltimbocca, Marsala, Scallopine and Piccante. Almost all dinner entrees are under $20 and what I didn’t realize before ordering was that all came with soup and salad, not just one or the other (or neither, as nothing was noted on the menu about this fact.)

Since I didn’t know two sets of starters would be coming, we ordered a plate of “Sal’s Calamari” to start. This was a generous plate of fried calamari served with mozzarella and spinach in marinara sauce. I love good fried calamari and this was definitely up there, very tender and a nice change of pace served with the spinach and sauce. The soup of the day which came with our entrees was a tasty, large bowl of minestrone with white beans and more spinach – just spicy and salty enough, it barely needed a touch of pepper.

The bread at Guillermo’s is also worthy of note: toasty and seasoned, similar to a garlic bread but fortunately for me, at least, not overloaded with actual garlic. Our house salads which followed were of the fairly standard iceberg/tomato/cucumber/carrot/crouton variety, but all ingredients were fresh enough and the croutons clearly house-made with that nice crusty bread again. 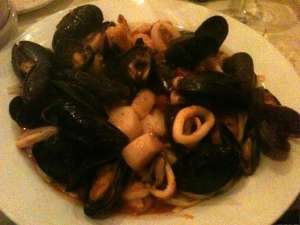 At this point I was nearly too full to even begin to enjoy my entree. Guillermo’s doesn’t believe in small portions of anything and my plate of Pasta Pescatore in Red Sauce was overflowing with mussels, shrimp, calamari and scallops. This dish is one of my standards for testing out an Italian kitchen and overall the preparation here stood up pretty well. I appreciated that the red sauce was flavorful without being loaded with excessive garlic, a problem I have with a lot of Italian-American food. The mussels were a little on the small side but all the other seafood was fresh and of high quality, not overcooked at all.

My companions both had two other seafood dishes, including a special pasta of the day featuring salmon and sun dried tomatoes in a cream sauce over penne. The sample I tasted was delicious but very heavy – I don’t think I could have eaten more than a small appetizer sized plate of it. “Debbie’s Special Salmon” featured a large piece of salmon stuffed with Italian cream cheese and spinach, topped with parmesan bread crumbs and baked. Actually it seemed the breadcrumbs were mostly in a pile to the side of the fish and rather unnecessary anyway, as the salmon was just fine without them.

All meat and seafood entrees at Guillermo’s come with a side of pasta in marinara sauce. It might be nice if a vegetable side dish was offered as an alternative as well. As it was, I couldn’t barely finish perhaps a third of my dinner entree, but I will say my seafood pasta tasted even better the next day gently reheated – the flavors had mellowed and blended extremely well.

After boxing up our leftovers, our waitress returned with a not especially inspiring dessert tray featuring four typical offerings: tiramisu, cheesecake, and two other cakes. We were far too full to even look very closely at them and stuck with coffee. Our total bill for three people before tip was about $75, quite reasonable given we’d each had a seafood entree and a large appetizer to share.

One last little quirk with Guillermo’s we discovered was we had to bring our bill up to the front counter to settle up, instead of having our waitress handle it at the table. A minor strangeness, perhaps, but I don’t understand why they do this as it makes the place feel more like a casual diner than the elegant restaurant for which they seem to be striving.

Overall, I’d certainly return to Guillermo’s again to try more of their menu offerings. The food was fresh, certainly generous, and while not earth shattering or inspirational it was good enough as quality Italian-American comfort food. Guillermo’s would be a good place for a group as well as for a couple looking for a quiet and relaxing date-night location.