Back to Eastern Garden in Sussex, New Jersey 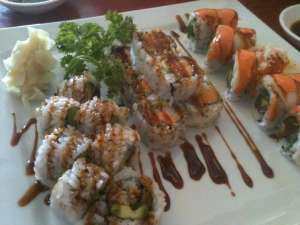 I’ve praised Eastern Garden Restaurant highly in the past, but I swear I fall more in love with this wonderful Japanese/Chinese restaurant every time I get the chance to visit them again. Who would have thought that my favorite sushi place would end up being in a strip mall in Sussex, New Jersey? But these guys really know what they’re doing, and not just with the sushi.

On this most recent visit I tried three rolls I hadn’t had in the past: a standard Eel and Avocado, a “Volcano” roll with sweet potato tempura, and a special “Shooting Star” roll with tuna and seaweed salad on the inside, topped with salmon and spicy sauce. The Shooting Star really earned its name – I haven’t seen seaweed salad used inside a roll before but this was just terrific. I honestly don’t know how I polished off that entire plate of food but somehow I did – and actually didn’t feel overstuffed afterward, either. Just the right rice/fish ratio for bite-sized pieces full of flavor and texture.

My dining companion had their outstanding Tofu Teriyaki. Seriously, this is the best Tofu Teriyaki you will find anywhere. The plate was so hot when first brought out the hostess wouldn’t let it be placed on our table until it had cooled for a minute. Eastern Garden uses delicious soft tofu in very small cubes for the teriyaki and also their Age Tofu, just so tender and flavorful you wouldn’t believe it. Our hostess explained that they get their tofu from a “special source” and use different kinds for their Chinese and Japanese dishes – not a lot of places I’ve been to are that fussy with their tofu.

Honestly we had an insane amount of food (including an appetizer roll and some nigiri for my companion) for all of $50 with tip. If I lived nearby I would be eating at Eastern Garden just about every day of the week. If you are in the Sussex area do give Eastern Garden a try, you won’t regret it.

One Response to Back to Eastern Garden in Sussex, New Jersey