My Foodie Story: Learning to Love Food and Cooking from My Grandmother

How I Went from a Picky Eater to a Gourmand

I suppose it’s fair to call me a “foodie,” although I’ve never been especially fond of the term. I do have a great love for food, be it home cooked or at a favorite restaurant, and will try almost any dish once. My partner calls our kitchen “Nicole’s Laboratory,” an apt description given my fondness for trying new recipes and experimenting to come up with my own. 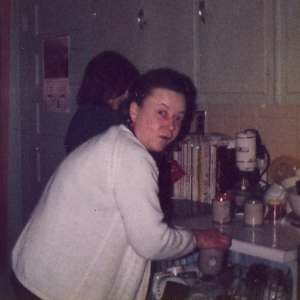 My grandmother in her kitchen, circa 1980.

My love for food goes back to my childhood. Like many kids, when I was very young my tastes were quite limited: plain pasta, fried foods, hot dogs and hamburgers. But that began to change as I grew a little older and my grandmother, whom I lived with along with my mother and grandfather, began experimenting with different cookbooks.

I’m not sure how she got started, except that my mother worked in New York City and had the opportunity to shop for many unique cookbooks there which she started to bring home to my grandmother. Suddenly instead of eating mostly basic Italian and Polish fare, which was what my grandfather preferred, we would be enjoying more exotic dishes from Spain, Thailand, Mexico and Japan. I learned to like eating my vegetables because of the sweet and tangy dishes from my grandmother’s “Japanese Country Cooking” book. I developed a taste for spicy food as she tried out recipes from Paul Prudhomme’s “Louisiana Kitchen.” Marcella Hazan introduced us to an entirely new wold of Northern Italian-style cuisine with her “Classic Italian Cooking” series. Instead of plain old roast chicken, we’d often be enjoying coq au vin or flautas de pollo.

While my grandfather wasn’t always pleased with these experiments, all of my school friends came to love coming over to our house for meals and parties where my grandmother would introduce them to foods never seen or heard of before in rural New York State, like the Japanese egg custard called chawan mushi or Spanish paella. I often spent a great deal of time in the kitchen with my grandmother, watching her cook and helping her with simple tasks like chopping vegetables or stirring risotto over the stove. Later in life, I’ve found great joy in being able to make many of these challenging dishes on my own, sometimes adapting them better to today’s tastes and a health conscious approach to cooking.

One such dish of my grandmother’s I’ve adapted for my own kitchen is her beef and rice stuffed peppers. I actually prefer to make it with chopped venison meat, which is much leaner and has a stronger flavor. The venison calls for more intense spices as well, and this dish makes a wonderful winter dinner at the end of deer hunting season.

Cut tops off bell peppers and retain. Clean out seeds and membranes. Place peppers, with tops, on a steamer rack over boiling water; cover and steam for 10 minutes until just starting to soften. Quickly cool peppers by rinsing under cold water, then pat dry and arrange them standing up in a baking dish.

Meanwhile, place rice in a saucepan with cup of water. Bring to a boil, reduce heat, cover and cook for 20 minutes. In a separate saucepan, combine tomatoes, 2 tablespoons olive oil, red pepper flakes, salt and pepper to taste. Allow this simple tomato sauce to cook over medium heat until just thickened and reduced, about 20 minutes.

In a saute pan, heat the remaining 2 tablespoons of olive oil and add the chopped garlic and onion until softened, about 3 minutes. Add the venison chop meat and cook until evenly browned. Add the rice, sage, thyme, oregano and Worcestershire sauce. Spoon in some of the cooked tomato sauce, about one cup’s worth, and adjust the seasoning to taste.

Fill the peppers with the rice and venison mixture. Place the cap on top of each pepper, then fill the baking dish with the remaining tomato sauce. Place peppers in the oven, covered, for 45 minutes, basting every 15 minutes with the tomato sauce.

Remove peppers from oven, take off caps, and place a slice of mozzarella cheese on top of each. Replace caps and return to oven, uncovered, for an additional 15 minutes or until the cheese is bubbly and melted.

Serve with crusty bread and a fresh garden salad.

This entry was posted in Cooking and tagged family recipe, venison. Bookmark the permalink.