This Italian BYOB Restaurant Features Pizza and More Prepared in a Wood-Fired Oven…but the results can be mixed.

Despite the restaurant’s popularity, Toscana’s food does not always live up to expectations.

Toscana Pizzeria and Grill in Mullica Hill is an extremely popular destination for Italian food in this area of Southern New Jersey. The restaurant regularly sees large crowds both for lunch and dinner service, yet are people coming because the food is that good, or because there are so few other choices for Italian cuisine in the vicinity? The answer is that Toscana offers a mostly satisfactory dining experience a cut above your average Italian-American “mom and pop” restaurant. Some of their dishes are more successfully executed than others, but the price is reasonable and the atmosphere comfortable, making it an acceptable choice for either a romantic meal for two or a fun family dinner gathering for more.

Toscana is a large and spacious restaurant, located in the Mullica Hill Shopping Plaza just off Bridgeton Pike (Route 77). Entering the restaurant, one finds it has that “flair and theme”-heavy atmosphere of so many suburban or chain restaurants: large decorative wine bottles and flowers everywhere, faux finished accents on the walls, and a decor to evoke the feeling of a Tuscan estate. Although Toscana is technically a BYOB restaurant, they do offer bottles of wine for sale from nearby Heritage Vineyards. Tables and booths are large and comfortable, and service typically prompt and friendly. 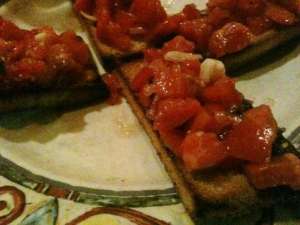 The menu at Toscana Pizzeria and Grill is quite lengthy, offering a full variety of appetizers, soups, salads, sandwiches, pastas, pizzas and entrees. Appetizers are much of what you would expect at a typical Italian restaurant:, Mussels or Clams Brodetto, Caprese Salad and Fried Mozzarella, while also featuring a few specialties such as Butterfly Shrimp and Toscana Wings. The Bruschetta ($5.99 for 4 large pieces) is excellent and indeed always worth ordering. The homemade bread is toasted in their wood-fired oven and topped with generous amounts of marinated tomatoes, somehow very tasty even in the middle of the winter and far from Jersey tomato season. A one-time special appetizer of baked artichoke hearts was delicious, and in a rich broth which was wonderful to mop up with Toscana’s hot-from-the-oven rolls. The Calamari Fritti Con Zucchini ($7.99) is also a good choice, featuring Semolina-crusted calamari and fresh zucchini, and served with both traditional cocktail sauce and a spicy tomato marinara. 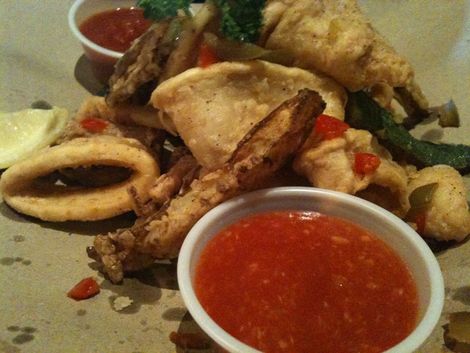 Sandwiches include a Filet Mignon Panino ($11.99) and Chicken Broccoli Rabe ($10.59), offered at both lunch and dinner time. Those with a light appetite may also want to consider one of their salads such as a classic Insalata Cesarina ($6.99) or Apple & Walnut Salad ($8.99); any of Toscana’s salads can be topped with Jumbo Shrimp, Grilled Chicken or Salmon for an additional charge. Of course the pizzas are a large draw to the restaurant with their special “rotating brick oven,” claimed to be the first of its kind in the country. Pizzas are prepared in either personal sizes or 1/2 meter lengths for sharing, and range from traditional Pizza Margherita ($9.99/$16.99) to the Riviera Pizza ($14.99/$22.00): tomato, mozzarella, scallops, shrimp, crab meat, arugula and chili peppers. 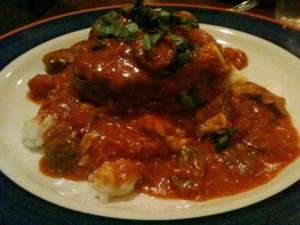 Oversaucing is a regular problem with food at Toscana.

Pasta offerings at Toscana are many, as expected, with a good number of options for vegetarians. Classic Primavera ($12.99), Pomodorini ($8.99) and Eggplant Rollatine ($13.99) share the menu with house specialties such as Tortelloni Siena ($14.99), featuring cheese tortelloni sauteed with roasted tomatoes, chicken, sweet peas and panchetta, all baked in a cream sauce with a cheese crust. Toscana has a tendency to be heavy-handed with their sauces, however, which is my main complaint with their pasta dishes – and some of their other entrees as well. A recent special pasta with crab meat-stuffed shrimp, snow peas and tomatoes in a cream sauce was tasty but practically drowning on the plate. The same fate was suffered by a Blue Flounder special, with the delicate fish wrapped in zucchini and served over rice in a tomato sauce. Again, the flavor was good but the fish and rice were completely overpowered by the amount of sauce ladled on top.

Better success at Toscana is often found with their grilled meat, pork and poultry offerings. A pork chop special in a wine reduction, served with grilled vegetables and over polenta, was perfectly cooked and delicious. Their take on a traditional “Bistecca Alla Fiorentina” ($20.59) is not-so traditional, prepared with flat iron steak and topped with blue cheese and Marsala sauce. While you’d never get such a dish in Florence, Italy, Toscana’s steak was still tasty and indeed, I would recommend any of their grilled meat preparations highly. 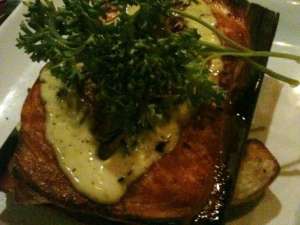 One of the most disappointing dishes I’ve had at Toscana is their Cedar Plank Salmon ($17.99). Cedar Plank Salmon has become a bit of a cliche in today’s restaurant world, but when prepared well it is still very good. On a recent visit, my order of this dish at Toscana was not. The salmon was severely overcooked and dry, and not herb-crusted as advertised. Indeed, it was topped with creamy dill sauce which did little to salvage the fish. Accompanying potato wedges were uninspiring, but at least the grilled vegetable slices on the side were good. Toscana offers other seafood entrees but I’d be hesitant to try them in the future after this experience.

All meat, poultry and fish dinner entrees at Toscana come with a traditional Iceberg Wedge Salad, served with either Blue Cheese, Creamy Italian, or Balsamic Vinaigrette. I would recommend asking for the dressing on the side as they do tend to be heavy-handed with pouring on the dressing, just as they are with their other sauces.

Overall, my feelings on Toscana Pizzeria and Grill in Mullica Hill are somewhat mixed. Certain dishes they do very well, such as their appetizers, sandwiches and grilled meats. Others suffer from a heavy-handed approach to saucing which I’ve often found problematic with Americanized Italian food. Yet the price and comfortable atmosphere tends to draw me back to the restaurant every so often, particularly with other choices in the immediate area being so few. On a recent visit our party of three enjoyed appetizers, entrees and dessert for $60, with leftovers to spare for the next day – not a bad price, although I would pay a bit more for better food.

This review was originally published March 16, 2011 at the Yahoo! Contributors Network. As of 2014, Toscana has closed.