Review of the Mission Grill in Philadelphia, Pennsylvania

Mission Grill is one of Philadelphia, Pennsylvania’s few Southwestern or “Tex-Mex”-style restaurants. While South Philly is home to many taquerias and Center City has several higher-end Mexican restaurants such as Lolita, El Vez and El Rey, there are less choices for fans of Southwestern American cuisine. Chef Stephen L. Regosch has attempted to fill that void with the Mission Grill, a spacious restaurant with a full bar offering a “refined casual” dining experience. While not inexpensive and far from the cutting edge of Philadelphia’s dining scene, Mission Grill mostly succeeds in providing tasty Southwestern food in a comfortable atmosphere.

After a visit to the Franklin Institute, a companion and I were looking for somewhere nearby to enjoy a pleasant meal. The Logan Square area, despite having many tourist attractions such as the Philadelphia Museum of Art and Academy of Natural Sciences, is not Philadelphia’s best neighborhood for restaurants. Still, the Mission Grill sounded worth a try based on their website, although we were disappointed to find out their hours were listed incorrectly on the site and we had to wait 15 minutes out in the cold February air to be let in for dinner service. 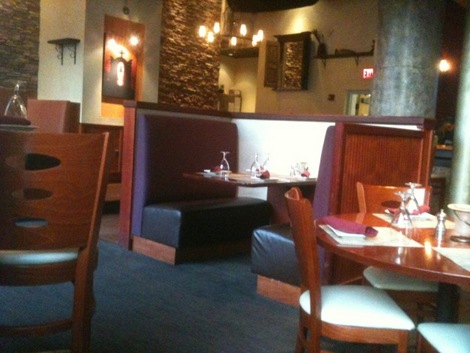 Entering the Mission Grill, we found an open, industrial-style space with high ceilings and large windows facing 19th Street. A long bar stretches across part of the room, with a small lounge to the right side to wait for a table. The atmosphere is somewhat reminiscent of a generic hotel restaurant, curiously enough: neutral beige colors, metal and wood, attractive yet a lacking in unique character or charm. Rock music was blaring loudly over the sound system when we first walked in, although it was soon turned down to a more comfortable level.

We were seated after a few minutes’ wait as the staff did not seem quite ready for dinner service. Seating in the Mission Grill is a mixture of large tables and booths, including two-seaters by the windows which are quite narrow – no room for a coat or purse beside you, so be sure to hang your coats in the coat check at the front.

We were brought drink and food menus promptly after being seated. The Mission Grill offers margaritas and sangria, red and white, available by the glass and by the pitcher. There are specialty martinis available ($12) as well as a fairly long wine list of primarily California vintages. Most wines are available by the glass as well as the bottle, with glasses priced $8-13 and bottles $32-130. We chose the margarita pitcher, for $40, which was listed as the equivalent of 5 glasses. This seemed a reasonable deal as individual margaritas were $10 each. The margarita was tasty, if not especially memorable compared to some of Philadelphia’s best. Fresh juice was certainly the base and not a margarita mix, but it was a little on the weak side without the distinctive tang of a quality tequila.

Dining choices at the Mission Grill include a variety of appetizers, sandwiches, salads, small and large plates. Appetizers range from the expected Tortilla Soup ($10) and Chicken Flautas ($9) to what you’d only find in Philadelphia: a Cheesesteak Spring Roll ($10). Small plates include selections such as Santa Fe Nachos ($9), Queso Fundido ($11) and Black Bean Hummus ($9). Sandwiches are mostly standard fare given a Southwestern kick, such as the Grilled Chicken Sandwich with Oaxaca Cheese and Serrano-Dijon Vinaigrette ($10). Full dinner plates include a Stuffed Chicken Breast with Poblano and Roasted Red Peppers, Oaxaca Cheese and Spanish Rice ($19), Fajitas ($16) and Pan-Seared Salmon with Peruvian Mashed Potatoes ($22). Mix-and-match tacos are available from $9-12 for 3, along with numerous sides for $6. 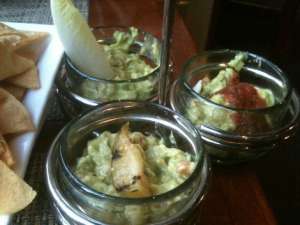 We decided to share the Guacamole Trio ($15) to start. This dish came with freshly made tortilla chips, Salsa Ranchera and three different versions of guacamole: traditional, crab and tomatillo. All three tasted very fresh and were rich with nice chunky pieces of avocado – my favorite was the tomatillo. We were offered additional chips if we wanted but declined as we did not wish to fill up before our main courses arrived. 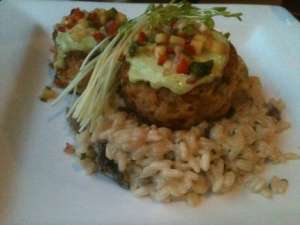 This choice was a good one as large plates at the Mission Grill are definitely that – large! The Pan-Seared Crab Cakes ($20) came highly recommended, and justifiably so. Two large crab cakes rested on a bed of wild mushroom risotto and with a Poblano cream sauce. The cakes were absolutely fresh and packed with lump crab meat, some of the finest crab cakes to be found in Philadelphia. 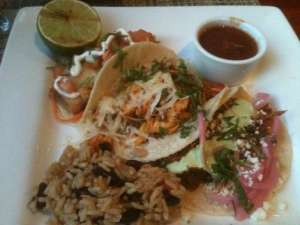 I chose a sampler of three different tacos: Pacific Cod with green cabbage and Salsa Ranchera, Pulled Pork with pickled red onion and cilantro-lime cream, and Chicken Chorizo with Manchego cheese and pico de gallo. Each one was delicious and had a unique flavor from the varied salsas, cheeses and vegetable toppings. The side of rice and beans which came with the tacos was unremarkable, but hardly needed with such a filling combination. 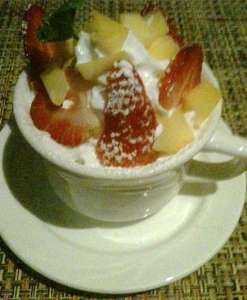 Although I was certain I had no room for dessert, my companion wished to try the Pot du Creme and I’m glad we did. Rich, intense chocolate was topped with cream, strawberries and fresh mango chunks for a refreshing end to the meal. Our total bill at the Mission Grill was just over $100 before tax and tip, not too unreasonable for Philadelphia given we had drinks and a large assortment of food.

Overall the Mission Grill is a fine choice for those in Philadelphia looking to get a Southwestern-food “fix.” While not inexpensive, the quality of the food merits the price and I would go back to order any of the dishes we tried again, as well as to sample many others. The atmosphere is not especially unique or memorable, but the restaurant provides a comfortable enough place to gather with friends or family while in the Logan Square area.

This review was first published on March 1, 2011 at the Yahoo! Contributors Network. As of August 2013, the Mission Grill was closed after 6 1/2 years of operation.