Enjoy Some of the City’s Best Italian Food at This Quaint, Affordable Restaurant

Salento is a shining star amidst Philadelphia, Pennsylvania’s crowded Italian BYOB scene. This delightful restaurant prepares truly authentic Italian food at affordable prices, distinguishing itself from the crowd by featuring specialties from the Puglia region of Italy, not often found on menus stateside. Chef Davide Faenza, originally from Gallipoli, prepares his food with passionate skill and a delicate hand. The result is an experience about as close to dining in a small trattoria or osteria in Italy as one can get in Philadelphia. 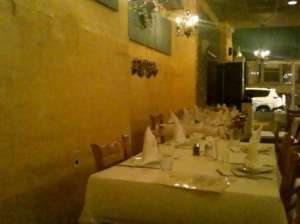 The interior of Salento BYOB in Philadelphia.

Salento is located on a stretch of Walnut Street not far from Rittenhouse Square, but just out of the way enough that it is often overlooked by Philadelphians searching for a place to eat in the area. The dining room is bright and inviting, with golden yellow walls, white tablecloths and light wooden chairs. The front room is separated from a back room (available for private dining events) by a large blue curtain. Wine glasses were quickly presented along with an ice bucket for our Vernaccia di San Gimignano, which our host studied carefully and even tasted so that he could point out menu items and specials which might pair with it the best. This attention to detail and consideration to thoughtful dining was our first indication of how special our meal at Salento was going to be.

Salento’s menu is fairly short, but features a variety of choices both familiar and unique. Salads and antipasti include standard Caesar Salad ($7) and Spring Mix ($6.50), but also more daring choices such as a Salentine-style Mixed Vegetable Antipasti ($9.50) or Bresaola with Shaved Grana and Arugula ($8). Pastas, all under $18, include selections such as Spaghetti Bolognese or Ricotta Gnocchi with Shrimp and Cream Sauce. Entrees, again all under $20 except for specials, include unique selections such as Boneless Chicken Breast with White Balsamic, Golden Raisins and Caramelized Onions. Desserts include homemade gelati, sorbets, and pastries. On weeknights, Salento also offers a three-course prix-fixe menu for $27. 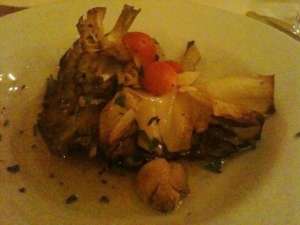 We decided to start our meal at Salento with two antipasti. The Crispy Pan-Seared Artichokes ($10) were an absolute delight, reminiscent of Roman-style Artichokes but served with a lovely garlic and vegetable broth. Also excellent were the Grilled Vegetables with Fresh Mozzarella ($9) topped with a sweet red pepper vinaigrette. We shared an order of Linguini Aglione ($13) next, which they graciously split and served in two half-order bowls for us. This outstanding pasta dish featured richly flavorful oven-roasted tomatoes, garlic and ricotta salata cheese. Deceptively simple, this dish showcased how perfect Italian food is all about the quality of each individual ingredient more so than fancy technique and preparation.

The bread at Salento also deserves a mention. Crusty, dense, and warm from the oven, their bread was quite addictive, especially with the fruity green olive oil served for dipping. Although we wanted to save room for our main courses, it was hard to stop using the bread to polish off every last bit of tomato sauce from our pasta bowls. 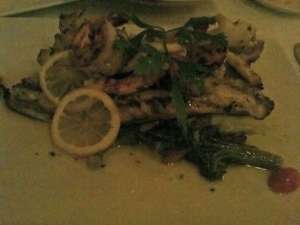 For my entree, I chose the night’s special Mixed Seafood Grill for $24. This generous plate consisted of a branzino fillet, shrimp and calamari in a light oil and lemon sauce, served with golden polenta and broccoli. The branzino was delicious and sweet; the shrimp crisp and meaty and the calamari wonderfully tender. This Seafood Grill was far superior to the same dish which I last enjoyed at Marc Vetri’s trendy Amis on 13th Street in Philadelphia. My companion enjoyed the Pork Chop Milanese ($18), which was an incredibly generous plate of breaded and thinly pounded pork served with a spring mix salad topping and potatoes. We both needed to have half of our entrees boxed to take home, as we were just too full by that point to clear our plates. 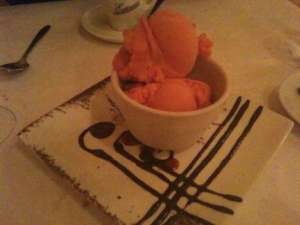 That said, we did leave a small amount of room for a light and tasty dessert. The Blood Orange Sorbet was terrific and served artistically on a plate of dusted and drizzled chocolate. On another night I would love to try some of their other desserts, which are prepared by Chef Davide’s wife Kathryn.

Our total bill for the evening was $91 before tip, quite reasonable given all the food that we enjoyed and the quality of the preparation. All told this was one of the best Italian meals I have enjoyed in Philadelphia in quite some time. Everything was perfect, from the service to the atmosphere to, of course, the food. I will be eager to return to Salento to sample more of their cuisine in the future. While there are many Italian BYOBs in the city, few I’ve been to measure up to Salento’s level of all-around quality and warm, attentive service.

This review was originally published at the Yahoo! Contributors Network on October 15, 2010. Sadly, as of January 2014 Salento has closed its doors for good – but owners Davide and Kathryn Faenza are still keeping their other Philly BYOB L’angolo going strong. I will have to check it out as soon as possible! – Nicole, August 2014.