Miran Korean Restaurant is one of Philadelphia, Pennsylvania’s few choices for Korean food, at least in the Center City area. While the Northeast and other suburbs of the city have large Korean populations that can support Korean barbecue establishments, in Center City we only have Giwa, Pastoral, Miga and Miran at last count. Of the four, Miran Korean Restaurant has been my “go-to” choice for many years as it best represents what I enjoy about Korean food. While the establishment has some issues when it comes to service, the food is authentic and flavorful, and the prices very reasonable. 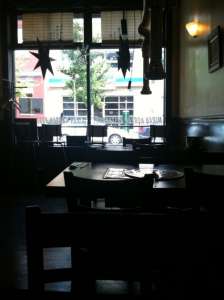 Located in western Center City on Chestnut Street, Miran Korean Restaurant replaced what had been a wonderful, small Asian market, so I had been doubtful to try them after they first opened several years ago. However, I was swayed into their favor by their preparation of my favorite Korean dish, Soft Tofu Chigae with Seafood and Vegetables ($9.99). This dish is a bubbling hot and spicy cauldron of soft tofu, mixed vegetables, pieces of shrimp and calamari and is absolutely delicious on a cold, winter’s day – or when attempting to recuperate from a night of heavy partying. Miran does not hold back on the spices as some Korean restaurants do when serving this dish to non-Koreans, so the pitcher of water left on one’s table is much appreciated when ordering this hot pot entree. 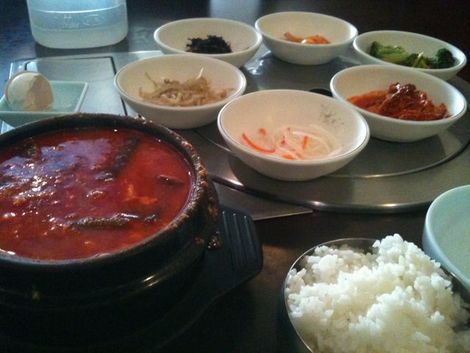 The decor at Miran Korean Restaurant is simple: dark wooden floors and tables, cream colored walls. It’s a small space in a first-floor storefront, with a narrow counter along the front for single diners or those waiting for a take-out order. All entrees at Miran come with an excellent assortment of banchan for the table. Banchan are traditional Korean “small plates,” and the selection changes daily although it always includes their excellent, house-made kimchi. Typically some type of namul (seasoned, steamed or stir-fried vegetables such as broccoli, bean sprouts or seaweed) will also be included. The banchan may also feature Korean-style potato salad or small pancakes, marinated tofu, and other interesting choices. 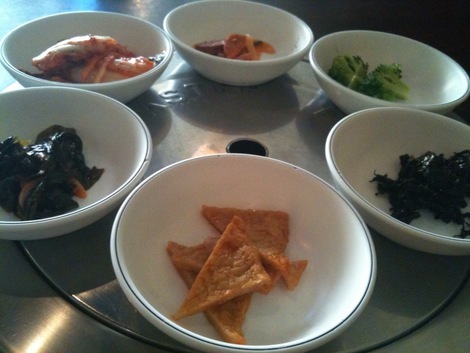 A little less successful is their version of Bibim Bap ($8.99), a traditional Korean dish of meat and vegetables served over rice. The Dolsot Bibim Bap ($10.99 – $12.99), served in a sizzling hot stone bowl, is better than the regular version, but still not quite as good as Giwa’s several blocks away on Sansom Street. Stir Fried Squid ($9.99) is for spicy-food lovers only, as it is a generous bowl of rice, squid and vegetable coated in a thick spicy red sauce. Miran features many other traditional Korean rice and noodle dishes, mostly all in the $8.99 to $13.99 price range, such as Kalbi Tang (prime beef short rib in beef broth, $11.99). For an appetizer, I recommend either the Seafood or Kimchi Pancake ($10.99), which is like a giant omlette featuring plentiful vegetables and seasoned with soy sauce. It’s enough to make a meal for one, or be shared with 2 or 3 people for a starter.

One of the best things to enjoy at Miran, however, is their Korean BBQ. Every table is equipped with a grill, and diners can choose form a selection of proteins such as thinly sliced marinated beef rib eye, pork belly, chicken, squid or shrimp. This is a dish for two or more diners only, and each order of meat ranges in price from $15.99 – $20.99. Diners cook their own meat on the grill, and then enjoy it with an assortment of accompaniments including rice, hot peppers, raw garlic, onions, mushrooms and dipping sauce. The meat and toppings are meant to be wrapped in fresh lettuce leaves, which crisply contrast with the spicy, hot BBQ meat. Ordering the BBQ is a lot of fun as it allows you to “play” with your food, but it does require some work as you must watch the meat carefully not to burn it, or undercook it. If your grill becomes to blackened, the server will quickly change it out, as well as adjust the heat of the grill if it is too high or too low.

Service is the one general complaint I have about Miran Korean Restaurant. Generally there only seems to be one server/host working in the restaurant’s small room, which can lead to long, slow waits to order your food, get replacement drinks or water, or get your bill at the end of the night. Communication can be problematic as well, as language seems to be a bit of a barrier. I once went with a group of four, and only three of us did the BBQ while one ordered a noodle dish. We ordered three BBQ meats and wondered why one seemed so especially plentiful; at the end of the night we discovered we had been charged for four servings even though we had only ordered for three, and clearly one of our party had not eaten the BBQ. It can also take some convincing, as a non-Korean, that you actually do know what some dishes are and want to order them. The server one night tried to talk me out of ordering the pork belly for the BBQ, not that there was anything wrong with it that night but I suppose because many non-Koreans are not accustomed to the fatty, bacon-like meat. But who doesn’t love bacon?

Miran Korean Restaurant has no liquor license and as such is a BYOB establishment. A Pennsylvania Wine & Spirits shop is only one block away on Chestnut Street, and also close by is Food & Friends on 20th Street, which features an excellent selection of specialty beers. Overall Miran is a solid choice for Korean food in Philadelphia, featuring reasonably priced, traditional dishes. I would recommend it to lovers of Korean food as well as to those looking to experience it for the first time.

This review was originally published on the Yahoo! Contributors Network on August 6, 2010. Miran closed in 2011.