Examining the Criticisms Against Chain Restaurants

This article was originally published on Associated Content on July 13, 2010. 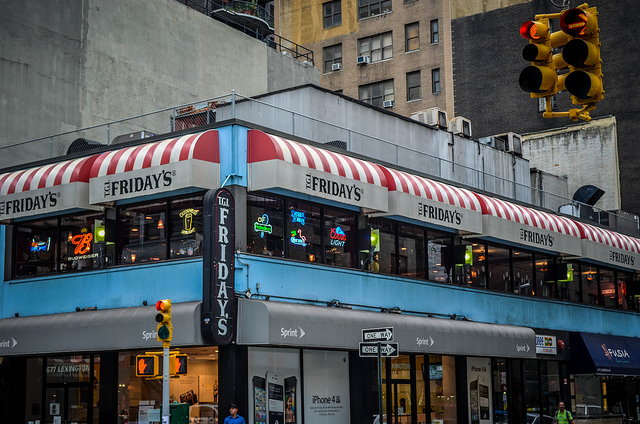 If there is one phrase which sends a shudder through almost every self-proclaimed foodie, it’s these two words: “Chain Restaurant.” Chains are reviled and ridiculed on almost every food blog and forum, including popular sites egullet and Chowhound. Yet all the negativity does nothing to stop the proliferation of Applebee’s, Ruby Tuesday, Houlihan’s and their ilk throughout the United States, as well as worldwide.

Chain restaurants serve unhealthy food in oversized portions, which is making America fat.
Chain restaurants are often brought under fire for their fatty, high-calorie foods. In May of 2010, Salon reported on the “unhealthiest restaurant chain in America,” calling out Cheesecake Factory for its Pasta Carbonara. The dish weighs in at an extreme 2,500 calories and 85 grams of saturated fat, and is far from alone in its unhealthiness if one looks at the nutritional information of many chain restaurant menus. Appetizers, entrees and desserts frequently weigh in at over 1,000 calories, even ones which diners might think are “healthy choices,” such as salads or grilled chicken.

Many chain restaurants, however, are better than independent establishments these days at providing marked, healthier alternatives to their regular menu items. Smaller portion options are becoming more prevalent at chains such as Applebee’s and T.G.I. Fridays. T.G.I. Fridays also notes dishes which are low carb and low fat on their menus. Applebee’s indicates both the Weight Watchers “Points” values on some of its menu items, and also has a new section of entrees which are 550 calories or less. Ted’s Montana Grill has a lengthy nutrition guide on their website with advice on how to request modifications for different dietary restrictions, and their bison entrees provide a lower calorie, lower fat option to regular beef.

In some cities such as New York City, chains are now mandated to reveal calories on all dishes, making it easier for diners to make informed choices about what they choose to eat. Independent restaurants are under no such similar legal mandate, therefore it is hard to know at all just how many calories and how much fat is in that Pasta Cabonara at your favorite local Italian restaurant as compared to Cheesecake Factory’s version.

Also, many of the diners and restaurants I frequent in South Jersey serve food which is easily as unhealthy as can be found in most chains. Gigantic bowls of pasta are buried in layers of cheese and oil; vegetables are heavily coated in butter; chicken and beef entrees could easily serve two to three people. Is it the restaurant’s fault–chain or not–if a diner chooses these offerings over healthier alternatives, or eats more than is necessary in one sitting? Personal responsibility is often neglected in arguments over the unhealthiness of chain restaurant food. Just because a waiter at Outback Steakhouse suggests you start with a 1550 calorie Bloomin’ Onion doesn’t mean you can’t order the 480 calorie Seared Ahi Tuna instead.

Chain restaurants promote mediocrity and serve prepackaged, microwaved food.
The freshness of food prepared in chain restaurants is often debated in internet forums. A lengthy thread on Chowhound argued whether anything at Olive Garden was actually prepared fresh, and a server there claimed only the Eggplant Parmesan was. Certainly I’ve had my share of sauces, dips, and even entrees at chains which tasted as if they came right out of a freezer pack or can–not exactly appetizing. Few things are less appetizing than the dip sampler at Don Pablos when the cheese dip already has a layer of skin on top from sitting around out of the microwave too long. Yet I could say the same about food I’ve tasted from inferior local restaurants as well. Non-chain status doesn’t guarantee freshness or home preparation, as anyone who’s viewed Gordon Ramsay’s Kitchen Nightmares can attest. When in doubt, I always try to stick to dishes which mandate a certain degree of fresh preparation, such as an entree salad or basic grilled meat.

Chain restaurants take away customers from better, local establishments.
One of the biggest complaints lobbed against chain restaurants by foodies is that they take away business from independent restaurants which would otherwise be thriving. First, this argument assumes that independent or “mom and pop” restaurants are always better than chains. This might be true in big cities such as New York, Philadelphia, San Francisco or Chicago, where indeed I do cringe to see tourists lining up outside of an Chili’s or Pizza Hut when there are so many great local dining options available. Why would one go to P.F. Chang’s when a city has its own Chinatown, full of restaurants serving authentic chinese food? Or go to Olive Garden in New York City when Little Italy is there for fine Italian dining?

Yet in some small towns or suburbs across the country, there are far less options available–and what is available locally may not be so great after all. When taking a long road trip through unfamiliar towns or on the interstate, a sign announcing a nearby Red Lobster or Macaroni Grill can be a comfort because it is familiar, and its “quality” (debatable as that may be) is at least a known quantity. Of course sampling local cuisines and specialties is something I always recommend to travelers and tourists, but sometimes finding quality eateries offering those specialties can be difficult without advance research.

People who patronize chain restaurants should be educated on how to enjoy better food by going to non-chain restaurants instead.
This is probably the most insulting and snobbish suggestion I’ve heard tossed around on foodie boards about chain restaurants. The assumption is that people who dine at chain restaurants by choice are “ignorant” about what “real food” should taste like. People on these boards moan and groan if they have to “suffer” going to a relative’s birthday party at Benihana, or an office luncheon at Carrabba’s. Other foodies offer support and sympathy, commenting morosely how unfortunate their fellow foodsnob is to have to suffer such a fate. People will even call a friend an idiot for liking Olive Garden, or ask for desperate help if they have to dine there.

Of course, what P.F. Chang’s serves is a very bastardized version of real Chinese, Thai and other Asian cuisines. And of course Olive Garden has about as much to do with authentic Italian cooking as Chef Boyardee. But like it or not, foodies need to realize that not every feels so strongly about food as they do–nor should they! While I may be passionate about classical art and wish that more people shared that passion, I don’t expect the world around me to understand why Titian is a far superior and authentic painter than Thomas Kinkade. Some people simply want a filling, satisfying meal that may not be gourmet and may not be authentic, but hits the right flavor combinations to appeal to their taste buds. That friend who wants to go to T.G.I. Friday’s for her birthday may really enjoy those big fruity drinks and want to have fun with her friends–not a gourmet dining experience. Foodies need to lighten up and occasionally grin and bear it, if they find themselves “forced” to go to a chain restaurant to make others happy. Not everything is always about the food.

Chain restaurants: in conclusion
No doubt, foodies will never stop complaining about the existence of chain restaurants. Yet just as undoubtably, chain restaurants are here to stay. Lovers of good food and supporters of local restaurants can and should continue to do their part to promote the establishments that they enjoy. But painting chain restaurants as the bane of society and a threat to fine dining does little to promote the foodies’ cause. Chains fill a particular niche in the dining scene of America, as well as worldwide, that isn’t going to go away. One may not enjoy every chain out there, but to write them all off as inferior and substandard is to be as ignorant as foodies claim those who patronize chain restaurants are.

This entry was posted in General restaurant reviews and tagged chain restaurants, dining out, food debates. Bookmark the permalink.