Tips and Etiquette for Enjoying the City’s Many BYOB Establishments 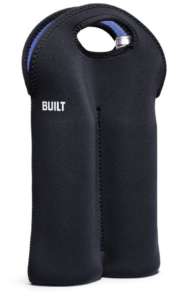 A wine tote such as this one is perfect for BYOB dining. It comes in multiple colors, with a built-in corkscrew and will keep wine insulated for up to 4 hours. Get it at Amazon.

Philadelphia, Pennsylvania’s restaurant scene is known for its large number of BYOB restaurants. If you are unfamiliar with BYOB practices and etiquette, read this guide before visiting the city of Philadelphia.

The great number of “Bring Your Own Beverage” or BYOB restaurants is one of the most notable features of the dining scene in Philadelphia, Pennsylvania. In fact it is almost seems more commonplace than not for a restaurant in Philadelphia to be BYOB, given the high costs of and difficulties involved in obtaining a liquor license in the city. This situation is a boon to vinophiles who enjoy bringing their own favorite wines to enjoy with their meal, while saving on having to pay the often high mark-ups on bottles in restaurants. Some Philadelphia BYOB restaurants even offer clever fruit juice mixers for diners to bring their own tequila or rum to create unique cocktails.

Visitors to the city are often confused about etiquette and what to expect when dining at a BYOB restaurant in Philadelphia. Hopefully the following guide will answer many of the questions tourists might have, and allow those visiting Philadelphia to enjoy the BYOB experience fully.

1. Is there a corkage fee for bringing your own wine to a restaurant in Philadelphia?

Generally the answer is no. Unlike in many other cites, most BYOB establishments in Philadelphia do not charge a corkage fee. In fact, I have never been charged one at any of the dozens of BYOBs I have dined at in the city, although there are a few establishments which do charge it. If in doubt, contact the restaurant beforehand to confirm their corkage policy.

2. Do restaurants in Philadelphia with liquor licenses allow diners to bring their own wine?

If a restaurant does have a liquor license, you should not bring your own wine without calling them first to confirm their policy. Some Philadelphia restaurants with liquor licenses do have certain weeknights where they allow diners to BYO without corkage. If they do allow BYO on other nights, there will generally be a corkage fee, typically in the range of $10-25. Note this is because you are effectively taking away their alcohol sales, so they must make up some minimal difference in their profits. It is truly only advisable to bring your own to a restaurant with a liquor license if you have a very special bottle of wine you’d like to enjoy with your meal. That is, don’t show up at Le Bec Fin or other high-end restaurant with a $6.00 bottle of Yellow Tail.

3. Where can I purchase alcoholic beverages before going to a BYOB in Philadelphia?

Wine and spirits are only sold in the state of Philadelphia through official state liquor stores. While many sing the praises of discount liquor stores across state lines in New Jersey and Delaware, please note that it is illegal to bring alcohol from out of state into Pennsylvania. The good news is that there are several state Wine & Spirit stores conveniently located near “hot spots” of BYOB activity, so it should be easy to make your selections before dining. Two of the better state stores in Center City, Philadelphia are at 1218 Chestnut Street and 1913 Chestnut Street. Beer is sold in many small food markets and specialty stores, including some with a vast selection of local and international brews. Food & Friends at 1933 Spruce Street is one of the best, and located near many BYOBs in the Rittenhouse Square/West Center City area.

4. Can I bring more than one bottle of wine to match courses?

You certainly can. Many BYOB restaurants in Philadelphia are used to customers who are true wine aficionados and want to pair their wine selections with each course. Or you may love red wine and be dining with someone who only drinks white. You can explain your wine selections and sequence to your waiter, who may be able to hold your extra bottles until the appropriate time and keep white wines chilled for you.

5. Can I bring leftover wine or spirits home with me?

Act 59 of 2003 states that a patron in Pennsylvania, in conjunction with a meal, may remove an unfinished portion of a bottle of wine from a restaurant. The bottle must be resealed, so don’t let your waiter run off with the bottle’s cork after opening. A nice wine tote will help you transport your wine or other drinks securely and attractively to and from the restaurant.

6. What are the best BYOBs in Philadelphia?

Many will argue about which BYOBs are the best in the city as there are so many from which to choose. For French food, both Bibou and Cochon are very popular. For Italian, Melograno, Branzino, and Porcini in Center City all regularly receive rave reviews, but Philadelphia has absolutely no shortage of Italian BYOBs in all areas of the city. Matyson, Audrey Claire and Meme are popular for New American food. Focusing on other cuisines, there is Kanella for Greek, Novita Bistro for Moroccan, and Miran for Korean. The Philadelphia forum on Chowhound is a good place to find reviews and opinions on many of the city’s BYOBs.

7. Is there anything else I should know about BYOB dining in Philadelphia?

There are a few additional points visitors should keep in mind about BYOB dining in Philadelphia, Pennsylvania. First, stemware selection may be limited. Most BYOs do not invest in the range and quality of glassware that restaurants with liquor licenses do for best showcasing their wine selections. In fact, popular BYO Audrey Claire only offers diners small glass tumblers to drink from, not even actual wine glasses. So if you are a vinophile who only wants to drink wine from stemware which best matches your red, white, or sparkling selection, you may wish to bring your own glasses as well.

Also, please keep in mind that table turnover is very important for BYOBs, as they do not have alcohol sales to help boost their profits. Therefore it is impolite to linger excessively after you’ve finished your meal at a BYOB, tying up a table that could otherwise be turned over for waiting diners. A server at a BYOB is not being rude if he brings over your check quickly after finishing your last course, just being efficient. There are many wonderful bars and cafes throughout the city if you would like to continue your evening out in a relaxing environment.

Lastly, many of Philadelphia’s BYOBs are cash-only establishments. When visiting, make sure to have sufficient cash with you to pay your bill, to avoid an awkward or embarrassing run to a nearby ATM.
Sources:

This article was originally published on Associated Content on July 12, 2010.