The Hollywood Cafe & Sports Bar in Woodbury Heights, New Jersey is almost always packed, and there is good reason for its popularity. While “New Jersey” and “diners” are almost synonymous terms, there are plenty of mediocre or just plain bad diners throughout the state–but the Hollywood Cafe is thankfully not one of them. This popular restaurant serves up plenty of old diner favorites while also putting a modern spin on the atmosphere, with its expansive sports bar section and outside patio during warm weather. Ample portions, reasonable prices and consistent food make the Hollywood Cafe a great place to stop in for a meal when in the Gloucester County area. 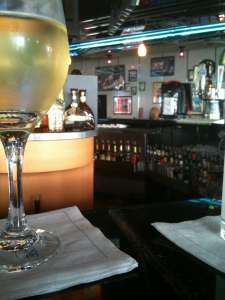 Entering the Hollywood Cafe & Sports Bar, one finds a large space divided into two separate areas. On one side is a rather traditional diner, with comfortable booths and a counter in the back near the kitchen. On the other side is the sports bar, with regular tables and two large bars where you can sit and watch the games on many large screen televisions while eating. On the bar side is also a covered patio which is open during the warm summer months. The menu is the same throughout, so seating is more a matter of your preference of atmosphere and what may be available. The sports bar area can get noisy and packed during big Phillies, Eagles and Flyers games, as the Philadelphia teams are very popular in this area just a half-hour outside of the city. On weekends when many take the family out for a late breakfast or Sunday brunch, sitting at the bar can actually be a quieter environment.

The menu at Hollywood Cafe & Sports Bar is just what one would expect at a diner: an almost dizzying array of sandwiches, salads, pastas, and traditional diner entrees such Chicken Parmigiana, Pork Chops, and Fried Shimp & Flounder. The sandwich section is the most diverse, featuring wraps, clubs, steaks and burgers, specialty hot sandwiches and traditional cold sandwiches. Most are all served with their excellent cole slaw and very good medium-cut fries, which are always crisp and not greasy. Pasta “Saute” dishes are a specialty of the house, and include choices such as the “Chicken Da Vinci” (chicken with onions, mushrooms and garlic in a marsala wine sauce, tossed with penne pasta and parmesan.) All entrees are served with soup or salad, and a choice of two daily vegetables or pasta. A daily menu of dinner specials typically includes items such as Chicken Pot Pie, Meatloaf, Grilled Swordfish, or Broiled Tilapia. Classic bar food and appetizers such as Nachos, Buffalo Wings, Chicken Fingers, Potato Skins and Fried Mozzarella Sticks are available. And of course, in true diner fashion, breakfast is served all day long.

When ordering entrees, be sure they don’t forget to give you a bread basket. The selection of fresh homemade hot rolls, banana and corn bread is quite delicious. The house salad that comes with entrees is standard but typically very fresh, a mixture of lettuce, red onion, cucumber, carrot and cherry tomatoes with chunky homemade croutons. Portions are always generous at the Hollywood Cafe & Sports Bar, especially with the entrees and pasta dishes–their Chicken Parmigiana may be the largest I’ve ever seen and is quite delicious too. The Chicken Portofino is a great choice for healthy dining, featuring an assortment of grilled vegetables and chicken in just a light olive oil marinade. The Grilled Vegetables alone are available as an “appetizer,” although the portion is easily an entire meal. Surprisingly, one of their best entrees is the Grilled Ribeye Steak. While it might not be up to expensive steakhouse standards, at under $20 for a 16oz steak with soup or salad and two vegetables, it far beats anything you’ll find at a national chain like Outback Steakhouse or Texas Roadhouse. 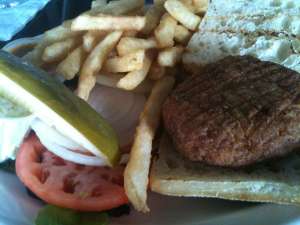 A classic hamburger at the Hollywood Cafe.

The sandwiches are a good bet if you are in the mood for a “lighter” yet still quite filling meal. I especially enjoy their Crab Cake Sandwich, served on a Ciabatta roll with baby greens, tomato, onion and spicy mayo. Hamburgers are solid, made with 10 oz. of Certified Angus Beef. For a treat, try the special Steak House Burger, topped with sauteed onion, mushrooms, roasted peppers, swiss cheese and spicy mayo. The Grilled Reuben is available with Corned Beef, Pastrami or Roast Turkey and is so generous you’ll need a knife and fork to eat it. 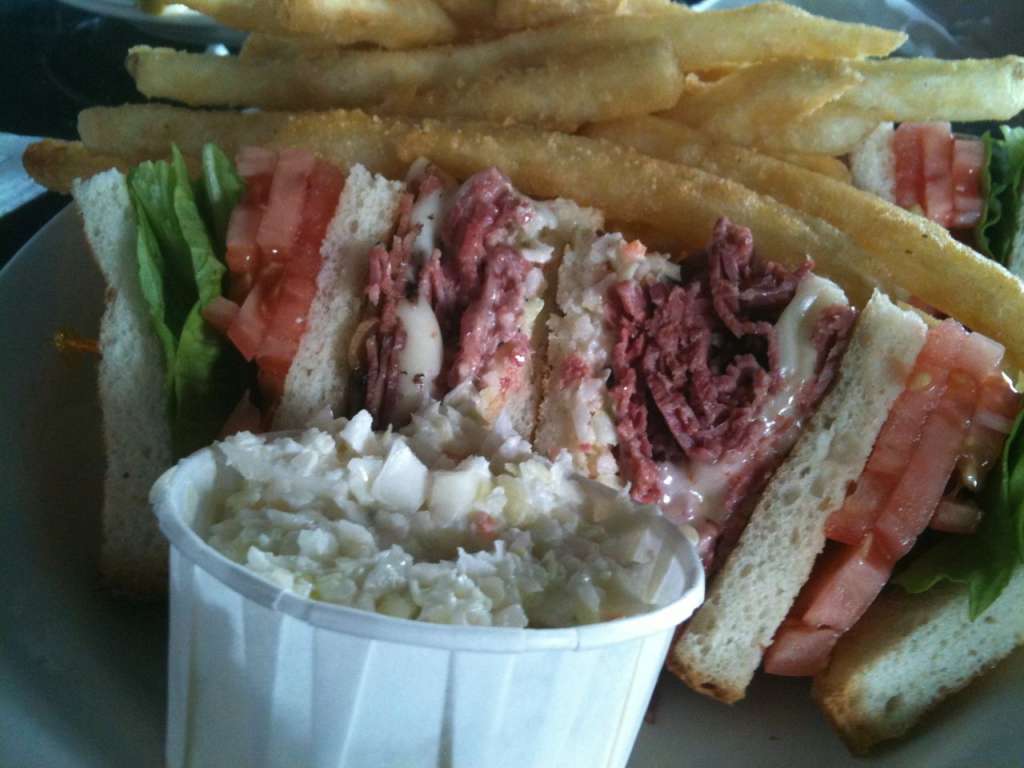 Go for a club! Sandwich, that is.

I have only had a few dishes at the Hollywood Cafe & Sports Bar I did not care for. I found their Chicken Pot Pie disappointing, in that it lacked much flavor and the vegetables in the pot pie were too big and chunky. The Key West Salad with shrimp and scallops was not especially good either, as the seafood was tough and did not taste especially fresh. Stick instead with the Spinach Salad, featuring bacon, mushrooms, tomato, feta and grilled chicken.

A wide variety of sweets, cakes and pastries are available for dessert, if you have room. Dinner specials typically include a choice of pudding or ice cream with the meal. The bar features a full range of spirits, bottled and draft beer, and not especially great wine but the pours are generous for the cost. Service is typically fine and friendly from the mostly young, female waitstaff. I’ve never had an order come out wrong, and even when the restaurant is packed food tends to arrive well-paced and without excessive delay.

Prices at the Hollywood Cafe might be a little higher than some of the diners in the area, but the quality of the food makes it worth it. Most dinner entrees are in the $12-18 range; sandwiches $6-12; salads $9-12 and breakfast meals $5-8. Typically a dinner for two, with perhaps two drinks, will run $35-50 at most and it is easier to eat for far less than that without alcoholic beverages, or sticking to the sandwich menu. It’s all up to what you’re in the mood to eat.

For those interested in the “nightlife” scene, the Sports Bar area of Hollywood Cafe has regular special events, such as karaoke on Wednesdays, a DJ on Thursdays, and food and drink discounts during sports events. All in all, the Hollywood Cafe & Sports Bar a fun place to go for a satisfying meal at a price that won’t break the bank. Next time you’re passing through Woodbury Heights in New Jersey, consider giving it a try.