A Rittenhouse Square Area Favorite Gets a Face-lift

Twenty Manning has been a neighborhood favorite hangout in the Rittenhouse Square area of Philadelphia, Pennsylvania since 1999 when it first opened. With its dark walls and slick interior, the restaurant had a cool vibe and frequently saw crowds filling their sidewalk tables late into the night in good weather. But the restaurant really never tickled the fancy of critics and serious “foodies” in Philadelphia. The general consensus seemed to be it was good, but not great, and mostly thriving on its location more than anything else. Hence, in early 2010 owner Audrey Taighman (who also owns the popular BYOB Audrey Claire just across the street), closed Twenty Manning for a face-lift and re-imagining. A short time later, it has now reemerged with bright white walls, a more casual attitude, and a slightly new name: Twenty Manning Grill. So is the change for the better? That’s the question this diner wanted to find the answer to on a recent visit.

Like many in Philadelphia, I had thought the original Twenty Manning was satisfactory, but for some reason it was rarely on my top list of places to dine in the neighborhood. Head chef and partner Kiong Banh was always an accommodating and warm personality in the restaurant, and typically my best experiences there would be ordering his chef’s special dinner for two, for $100 including a bottle of wine. That special is now long gone, as are many of the old dishes from the previously heavily Asian-themed menu. The theme here is now much more “new American,” with the oh-so-trendy emphasis on seasonal ingredients and locally sourced meats and vegetables. Nothing wrong with that, admittedly, as I am a firm supporter of thinking local and fresh when it comes to food. 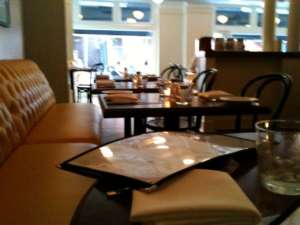 Entering the “new” Twenty Manning Grill, I did not notice a great change in the main dining room except for the paint job, and the large blackboard around the bar area replacing the old TV which used to show vintage black and white movies. There is still the same basic dining room set up on one side, a long high-seat bar table down the middle, and a few booths and more comfortable tables in the back behind the bar. We were lucky to be given one of those corner booths, which gave us a great place to sit and take in the atmosphere. The drink menu consisted of a decent selection of wines by the bottle and glass, local draught beers, and house cocktails–many of which are confusingly listed as martinis when they are nothing of the sort. Nevertheless I enjoyed that they had several unique bourbon-based options including the “Maker’s Smash”, and my dining companion tried a Fresh Basil Mojito which was excellent.

The menu at Twenty Manning Grill is heavy on American comfort food and popular international choices. A section entitled “Greens” features salad selections such as Farmers Market Beets ($10), Lancaster Baby Romaine ($7), and a “Chop Chop Salad” of English cucumber, green peas, gala apples, grape tomatoes and Vermont cheddar ($8). Turkey, tuna, and vegetarian burgers are offered, as well as a traditional burger of grass fed, pasture-raised beef. ($10-13 with $2 additions available.) For snacks or appetizers, there is Smoked Trout ($10), Margherita Pizza ($12), Mixed Olives ($5) and Crab Cakes ($9.50). A few raw bar options are available such as Tuna Sashimi ($9) and Oysters on the Half Shell ($12). Main entree selections are not extensive but traditional favorites such as Bucatini Amatriciana ($10), Vegetable Stir Fry ($14), Seared Ahi Tuna ($18) and a Sirloin Beef Bowl carried over from the original Twenty Manning menu ($18). Nightly specials are available, such as Mac n Cheese on Tuesdays ($11) and a Maine Lobster Roll on Fridays ($19). A number of side dishes are offered for $4-6 including Crispy Brussel Sprouts, Wedge Fries, Sauteed Spinach and English Peas. 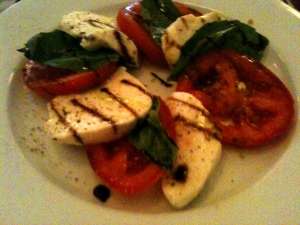 We decided to start with a Caprese Salad ($9) and Pork Pot Stickers ($8). The salad was nicely prepared, with lightly grilled mozzarella slices over very fresh and flavorful tomatoes. The pot stickers were satisfyingly pan-fried and delicious. Also served to our table were several enticing, warm rolls of fresh bread and, interestingly, several fresh whole radishes with an instruction to dip them lightly in coarse salt to “cleanse the palate.” 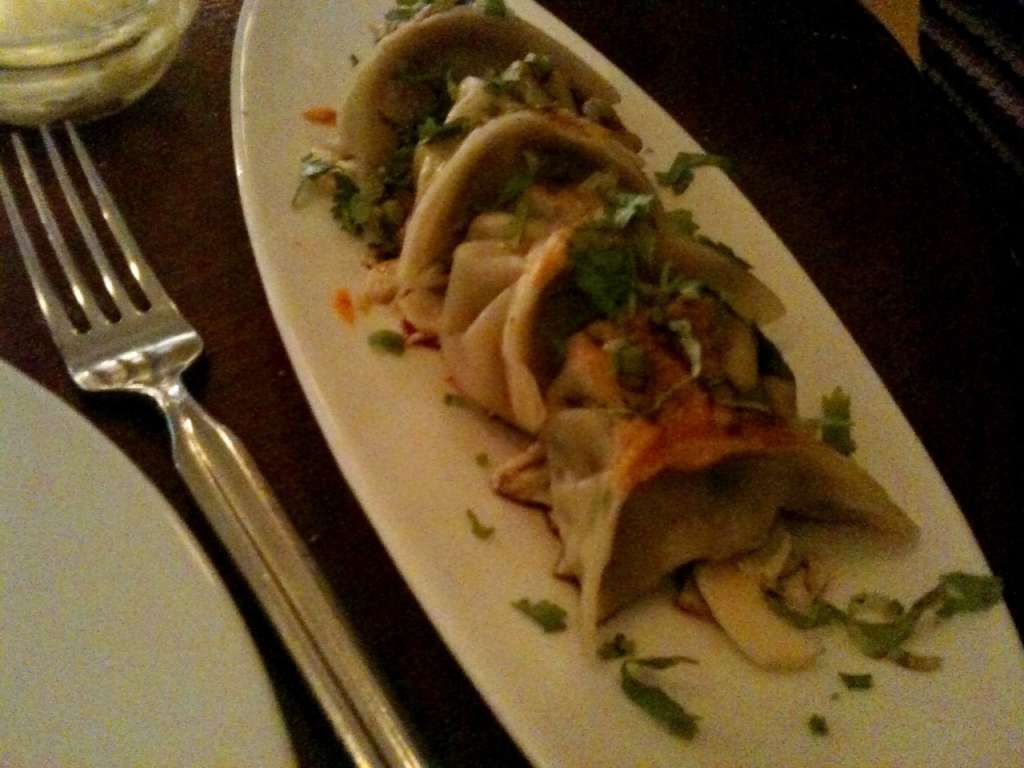 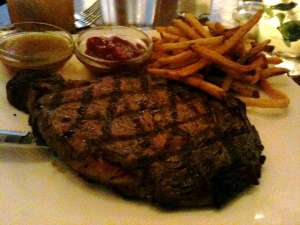 Our entrees followed next after a bit of a lengthy wait. My companion had the Roasted Scottish Salmon, served with green beans and yukon potatoes ($18). It was a very sizable piece of salmon for the price and tasty, although to me it seemed slightly overcooked. I ordered the Steak Frites as I am a sucker for good grilled beef, especially rib-eye cut. The steak was excellently cooked, perfectly medium rare and served with a side of adequate, if not exciting, shoestring french fries. 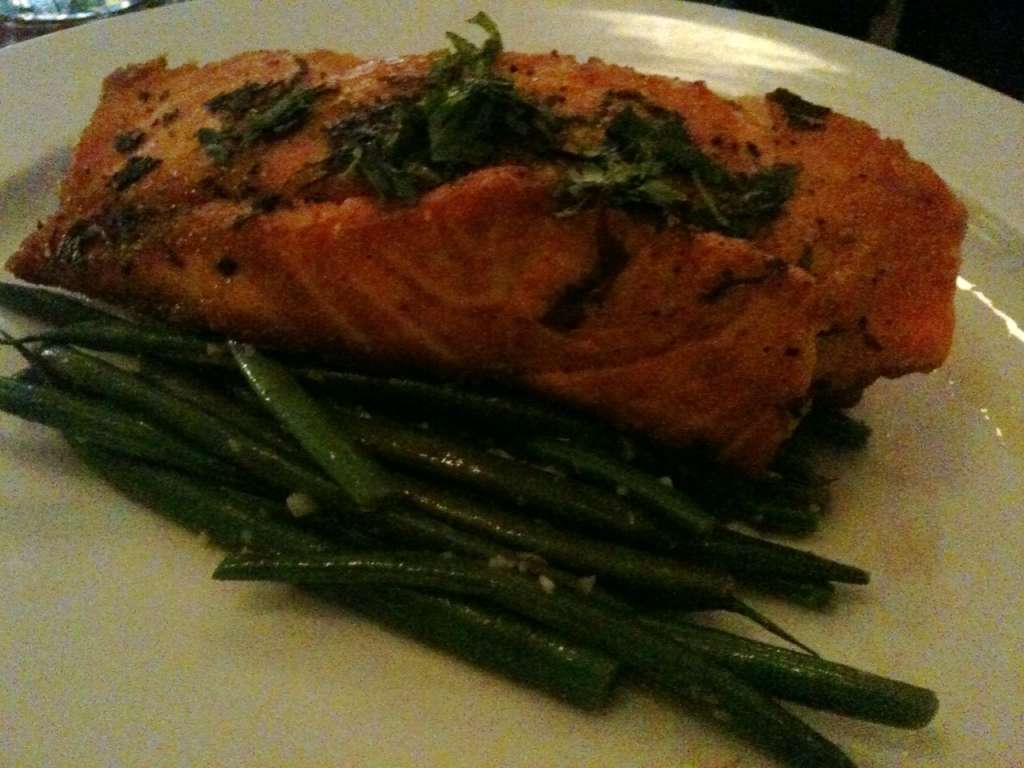 Dessert was out of the question for us as we were too full and in a rush to make it back home for the Flyers game. Options such as Strawberry Shortcake, a Vanilla Sundae, and a “Half Baked” Toll House Cookie with ice cream are available for $6 for those who leave room.

Our bill for four mixed drinks, two appetizers, and two entrees was $98. Not so different from what it would have been for Chef Kiong Banh’s Dinner for Two in the restaurant’s original version, although with less creative and original options available. As such, I find myself of two minds about the new version of Twenty Manning. Certainly there are more options available at the restaurant now for diners who want a lighter, less expensive meal, or more traditional fare. And most dishes were prepared quite well, except for the overcooked salmon.

On the other hand, the current menu selections are all a bit staid, basic and boring. I actually found it hard to decide what I wanted to eat because nothing on the menu especially jumped out at me as exciting or interesting to try. Another burger? There are already so many amazing burgers in the neighborhood–just on 20th Street alone at either Village Whiskey and Pub & Kitchen–that I really wonder if we need another one? Fried calamari, mac n cheese, crab cakes…again, nothing different, nothing new. Nothing that would compel to spend my dining dollars there instead of elsewhere, or just at home if I wanted to cook something basic and traditional.

As such, I’m not sure how likely I am to chose planning a dinner at Philadelphia’s Twenty Manning Grill in the future. The city has so many other innovative and unique options available and while the price is not out of line, the lack of originality is a bit disappointing. I’m still more likely, as I have been in the past, to go to Ms. Taighman’s Audrey Claire just across the street, where the menu is typically more interesting and seasonally influenced.