Terrific Japanese and Chinese Food Can Be Found at Eastern Garden in Sussex, New Jersey

From the outside, Eastern Garden in Sussex, New Jersey looks like just another strip-mall, average Asian restaurant. I wasn’t expecting much when I first dined there months ago, but have been consistently impressed by the quality and presentation of their diverse menu of Chinese and Japanese favorites, particularly their excellent sushi. When traveling through the Sussex, New Jersey area, Eastern Garden is one restaurant I always try to make plans to visit. Pleasant service, great food and reasonable prices all combine to make this a surprisingly high-quality, sophisticated restaurant for a rural farming community.

The decor in Eastern Garden is clean and attractive, if not particularly unique. The small dining room has one central divider with booths and tables set up in two rows on either side of it. In the back of the dining room is the small sushi bar with several seats available. Eastern Garden does not have a liquor license and encourages diners to “Bring Your Own Wine.” Don’t worry, because there are two good liquor stores nearby, Patrick’s Wine Barn and Woody’s, where you can pick up a bottle of chilled Sauvignon blanc or Riesling, always good choices with Asian food. The waitstaff at Eastern Garden are very accommodating with their wine service, quickly offering to open your bottle and bringing glassware, along with a pot of hot tea. 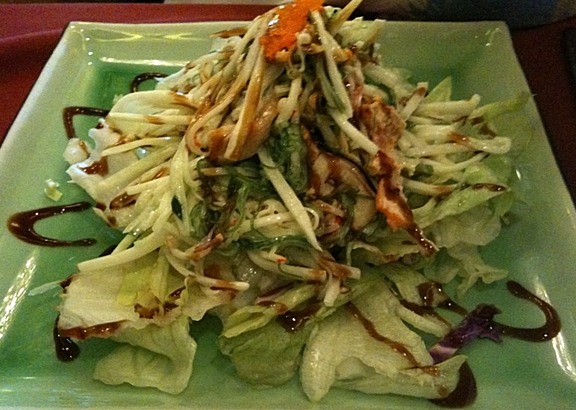 Eastern Garden’s menu presents a diverse offering of Chinese and Japanese dining selections. I typically stick to the Japanese choices as those are my favorites, although I’ve had their Double Sauteed Pork ($8.50) and House Special Lo Mein ($7.95) before and found them to be quite good. On a recent visit with two others, we sampled a large variety of items offered on their Japanese menu. We started with Edamame (broiled Japanese green soy beans, $3.50), Sunomono Soup (clear soup with crabmeat and scallions, $2.00), and Shumai (steamed seafood dumplings, $4.50) as appetizers. All three were satisfactory, and the shumai were particularly nice. Next we shared a “Special Salad” ($7.95) of the day, which was recommended to us by our server. Generally I’ve found their recommendations to be good, even though the salad sounded unusual at first. It was a combination of various types of Japanese salads including seaweed, octopus, crab, and cucumber, all served a top a bed of lettuce with two different dressings. The salad was in fact amazing and I told our server I hoped it would become part of their regular menu. I would go back in a heartbeat just for that salad! 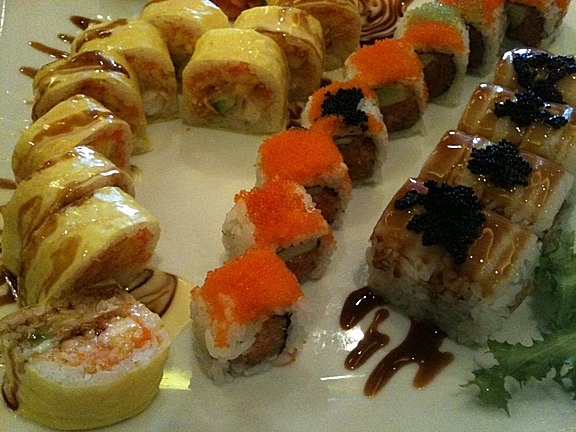 We ordered four special maki rolls to share around the table. First was a classic Dragon Roll ($7.95), featuring eel and cucumber inside with avocado on the top. Then we had the Flower Roll ($8.25), which featured spicy tuna, avocado, and was topped with different colors of fish roe. We tried a special roll of the day, the Black Rose ($8.95) which featured two types of tuna inside, and was topped with white fish and black roe. Lastly, we ordered the Golden Dragon Roll ($12.95), easily the best roll offered by Eastern Garden. It contains lobster, spicy crabmeat, avocado, mango, and fish egg and is wrapped in soy bean “seaweed.” All the rolls were very fresh tasting and artistically prepared. The rice-to-fish ratio was good, and their spicy sauce not overwhelming on the tuna and crab.

We also ordered a bowl of Nabeyaki Udon (Japanese noodles with seafood, chicken, vegetables and egg in a chicken broth with shrimp tempura, $11.75). All the cooked seafood was extremely fresh tasting, but sadly they had no Togarashi seasoning on hand to spice it up. Next time we’ll bring our own. We were really too full for the Udon by that point anyway, so we took most of it home and enjoyed it the next day instead.