Last night, my fiance and I were in the mood for a fine Italian meal so we decided to visit DiPaolo’s Italian Restaurant in Penns Grove, New Jersey. DiPaolo’s Italian Restaurant came highly recommended to us by family members living in the area. The Iceland Volcano eruption had ruined our plans to visit Venice this week, so we wanted to drown our sorrows in a good bottle of wine and food that would transport us, at least as much as possible, to Italy.

Penns Grove, NJ, 40 minutes outside of Philadelphia and 20 minutes from Wilmington, is not the first destination either of us would think of as a hotspot for Italian dining, but we decided to give DiPaolo’s a try nevertheless. At the end of the evening, we were beyond thrilled that we had. DiPaolo’s Italian Restaurant prepares food as outstanding as one can find in Philadelphia’s finest restaurants, and good enough to rival the food we’ve enjoyed in Italy itself.

Entering the restaurant, we found ourselves in an attractive, spacious dining room and were seated promptly by the friendly, professional staff. The atmosphere and decor of DiPaolo’s Italian Restaurant is reminiscent of a Tuscan villa, with attractive murals decorating the warmly painted walls and brick archways accenting the restaurant’s rooms. Our waitress offered us regular or bottled water, and gave us several minutes to browse their well-selected and affordable wine list. Featuring bottles from Italy, Spain, America and elsewhere, we decided upon a Banfi Chianti Classico Reserva at $32. Most wines on their list were in the $26 – 45 range, with many selections available by the glass as well.

Browsing through the menu selections at DiPaolo’s Italian Restaurant, I was taken aback at first by the prices. Most antipasti selections were in the $12-20 range. Entrees ranged from $17-50 with most in the $30-40 range. These prices seemed more like what I would expect to find in Atlantic City or New York, not in Penns Grove. But then I recalled reading reviews which described the tremendous portion sizes, and saw that all entrees included not just salad but a mixed vegetable antipasti plate. With that much coming before our main courses, we decided to skip any appetizers, even through they offered some of my Italian favorites, including Bruschetta, Calamari Fritti (fried calamari) and Zuppa di Pesce (mixed seafood in a red fish sauce).

DiPaolo’s Italian Restaurant entree selection covered a wide variety of pasta, risotto, seafood, poultry and beef selections, including a variety of homemade specialty ravioli. I decided upon the Linguine Fradiavolo, featuring shrimp, scallops, lump crab meat and mussels in a spicy lobster blush sauce ($36). My fiance chose a special of the night featuring a 28 oz. Certified Angus steak with tomatoes and Burrata cheese ($49). We were then brought a bread basket featuring tasty, crusty Italian bread and our mixed vegetable antipasti. The antipasti plate featured delicious, oil-cured black olives, chick peas, tender broccoli rabe, grilled red peppers and eggplant, fried zucchini, and delicious, quality Italian hard cheese. We had to stop ourselves from cleaning the entire plate, knowing we had much more food to come.

Our salads arrived next, featuring romaine, baby lettuce, cherry tomatoes and cucumber in a house vinaigrette. The dressing was delicious and light, and the greens perfectly fresh. Again, we stopped ourselves from eating every last bite as we were already beginning to feel somewhat full. From what we’d enjoyed of DiPaolo’s cuisine so far, we were eager to taste our main courses. 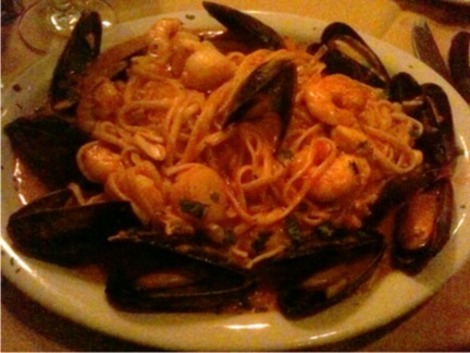 Our entrees arrived after a brief wait and were astonishingly huge – and delicious. I’m not always a big fan of cream sauces, but the spicy blush sauce on my Fradiavolo was outstanding. DiPaolo’s gets their seafood daily from the Philadelphia Fish Market, and the freshness of the mussels, shrimp and crab definitely shone through. My fiance’s steak was equally outstanding, served on top of a bed of broccoli rabe and with a side of flavorful mashed potatoes and grilled asparagus. 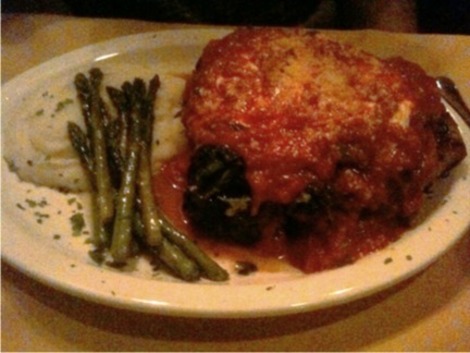 As much as we enjoyed our entrees, neither of us were able to finish more than perhaps a quarter or a third of the food on our plates. Our waitress quickly cleared our meals and boxed up our leftovers for us – which seemed to be the norm and expectation at DiPaolo’s, with similar boxes going out to every other table. We asked jokingly if anyone ever managed to complete their meal and our waitress laughed and told us “very rarely.” We were much too full to attempt dessert, even though the selections on the dessert tray looked delicious. Instead we ordered espresso, along with one shot of grappa to help as a digestive for the rich meal.

Our bill in total was $145 before tip, which seemed perfectly fair given the quality and quantity of the meal we had enjoyed. It is rare to enjoy both such enormous portions of food and for it to be so excellently prepared, but DiPaolo’s Italian Restaurant somehow manages to succeed at both. DiPaolo’s also offers regular events such as wine-tasting dinners, Sunday Brunch, live music and a weekly Prime Rib and Shrimp Buffet. We will certainly return to this wonderful restaurant on on future nights, for another authentic taste of Italy so close to home in Southern New Jersey.

This review was originally published at the Yahoo! Contributors Network on April 19, 2010.