A popular BYOB establishment in Philadelphia since 2007, the author finally has the chance to check it out – and rues having waited so long.

I don’t venture into Queens Village that frequently, which is probably why I had yet to try Cochon BYOB until recently. But the spring-like weather after a seemingly endless cold winter left me in the mood for a long walk – and a hearty meal to follow it. I made arrangements to meet a friend at Cochon for a mid-week dinner, and found much to be impressed by. In fact, if they were located closer to where I live, I fear I’d be tempted to dine there far more often than would be good for me. 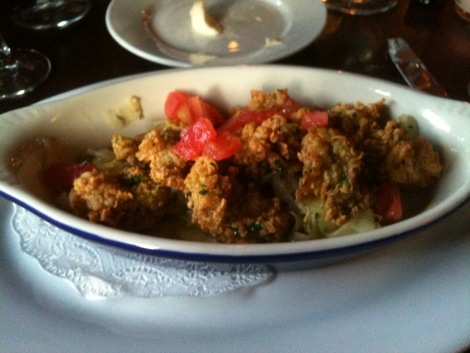 The restaurant’s space is cozy and unassuming. I was seated promptly as the room was mostly empty at my 6:30 arrival time. Service was polite and efficient, with our waiter promptly bringing us flutes for our champagne as well as regular glasses for our non-bubbly wine. The menu was short: six starters, six main dishes, plus a few specials. I decided on Fried Oysters to start, which were wonderfully crisp and non-greasy, paired with a light fennel slaw. My companion had a homemade pasta special of the night, which was nearly main course sized and rich with pancetta and cheese. 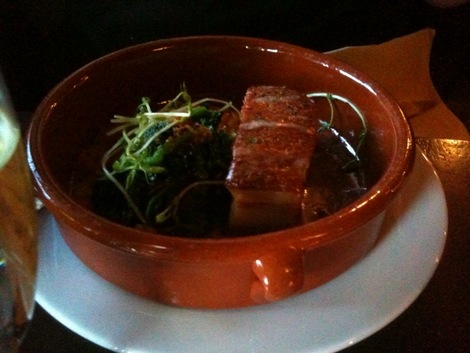 Of course, given the restaurant’s name it seemed pork would be the best choice for main courses. I selected the slow-roasted suckling pig, which was simply divine. Succulent, tender and flavorful meat rested on top of lentils and charred brussel sprouts. The mustard broth was a wonderful companion to the sprouts, and a few small gherkins and a delicious poached egg, plus some crispy pork rind, made for an amazing dish. My companion ordered the pork belly, which was a generous chunk of crispy (and yes, fatty by nature) meat served with sweet potato puree and mustard greens.

I was already full and needed half of my entree wrapped to take home, but we just had to try the desserts. A homemade chocolate bread pudding was delicious, as rich as a flourless chocolate cake but far more moist. A fruit crumble with rhubarb and berries was somehow both liquidy and crunchy, and rich with flavor.

Our total at the end of the night was $95 before tip. The restaurant was completely full by 8pm, when we were preparing to leave, and it’s easy to see why. I will gladly return to Cochon to try more dishes from their menu. It’s a most welcome addition to Philadelphia’s crowded BYOB scene, and I only regret that it’s taken me so many years to find my way there.

This review was originally published at the Yahoo! Contributors Network on March 20, 2010.